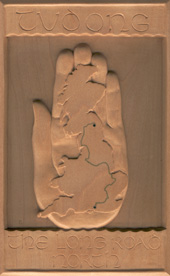 This book is an account of a ‘tudong’ walk through England, made in 1983 by Ajahn Amaro and Nick Scott. During following year Ajahn Amaro typed up his diaries and, with the generous contributions of many friends of the monastery – particularly Nancy Sloane Stanley’s illustrations Sujata’s calligraphy and Nick Scott’s maps – 1000 copies rolled off the machines at the local Tyneside Free Press in the all of 1984.

Although some of the material appeared in the later compilation Silent Rain, up until now those 1000 copies were the only ones in existence. We are now delighted to be able to offer this web-edition of Tudong – The Long Road North, making the book available once more after a 25 year hiatus.

Born in England in 1956, Ven. Amaro Bhikkhu received his BSc. in Psychology and Physiology from the University of London. Spiritual searching led him to Thailand, where he went to Wat Pah Nanachat, a Forest Tradition monastery established for Western disciples of Thai meditation master Ajahn Chah, who ordained him as a bhikkhu in 1979. He returned to England and joined Ajahn Sumedho at the newly established Chithurst Monastery. He resided for many years at the Amaravati Buddhist Centre north of London, making trips to California every year during the 1990s. Since June of 1996 he has lived at Abhayagiri Monastery. He has written an account of his 830-mile trek from Chithurst to Harnham Vihara called Tudong – the Long Road North, republished in the expanded book Silent Rain, now available for free distribution and he published another book, Small Boat, Great Mountain, in 2003 that is also available for free distribution. On June 16th, 2005 Ajahn Amaro returned to Abhayagiri after spending one year on sabbatical visiting Buddhist holy places in India, Nepal, and Bhutan.

He is now the Abbott of Amaravati Buddhist Monastery.