Teachings of a Buddhist Monk 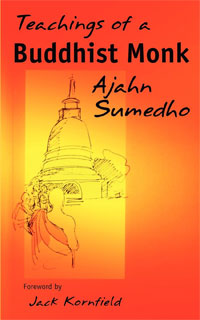 Teachings of a Buddhist Monk

Modern practical teachings from an American monk living within one of the oldest Buddhist traditions.

Spiritual life is not about becoming someone special but discovering a greatness of heart within us and every being. It is an invitation to inwardly drop our opinions, our views, our ideas, our thoughts, our whole sense of time and ourselves, and come to rest in no fixed position. Ajahn Sumedho invites us all, ordained and lay people alike, to enjoy the freedom beyond all conditions, a freedom from fears, from gain and loss, from pleasure and pain. This is the joy and happiness of the Buddha.

You can buy Teachings of a Buddhist Monk from the Book Depository for around £8.95 with free worldwide delivery. See below for other online sites

The path of mindfulness is the path of no preferences. When we prefer one thing to another, then we concentrate on it: ‘I prefer peace to chaos.’ So, then, in order to have peace, what do we do? We have to go to some place where there is no confusion, become a hermit, go up to the Orkneys, find a cave. I found a super cave once off the coast of Thailand. It was on a beautiful little island in the Gulf of Siam. And it was my sixth year as a monk. All these Westerners were coming to Wat Pah Pong-Western monks. And they were causing me a lot of sorrow and despair. I thought: ‘I don’t want to teach these people; they’re too much of a problem; they’re too demanding; I want to get as far away from Western monks as possible.’ The previous year I had spent a Rains Retreat with five others. Oh, what a miserable Rains Retreat that was! I thought: ‘I’m not going to put up with that! I didn’t come here to do that; I came here to have peace.’ So I made some excuse to go to Bangkok and from there I found this island. I thought it was perfect. They had caves on the island and little huts on the beaches. It was the perfect set-up for a monk. One could go and get one of those huts and live in it. And then go on alms-round in the village. The village people were all very friendly, especially to Western monks because to be a Western monk was very unusual. We could depend on having all the food we could possibly eat, and more. It was not a place that was easy to get to, being out in the Gulf of Thailand, and I thought: ‘Oh, they’ll never find me out here, those Western monks; they’ll not find me here.’ And then I found a cave, one with a Jongram, and it was beautiful. It had an inner chamber that was completely dark and no sounds could penetrate. I crawled in through a hole and inside there was nothing. I could neither see nor hear anything. So it was ideal for sensory deprivation: ‘Oh, this is exactly what I’ve been looking for; I can practise all these high jhanic states. I can go in this cave and just practise for hours on end with no kind of sense stimulation.’ I really wanted to see what would happen. But there was this old monk living in this cave who was not sure whether he was going to stay. Anyway, he said I could have the grass hut on the top of the hill. I went up there and looked, and down below was the sea. I thought, ‘Oh, this is also nice because now I can concentrate on the sea, which is tranquillising.’

There was a Thai monk on the island who was a very good friend of mine and he said: ‘Well, if they find you here, there’s an island about fifteen miles further out-they’ll never find you there. There’s a little hut there, and a little village; the people in the village would love to take care of a monk.’ So I was thinking: ‘You know, possibly after the Rains Retreat, I will go out to that further island.’

I really was determined to escape. I wanted peace and I found the Western monks very confusing. They would always ask lots of questions and were so demanding. So I was all set to spend the Rains Retreat in this idyllic situation. And then-this foot! My right foot became severely infected and they had to take me off the island into the local hospital on the mainland. I was very ill. They would not let me go back to the island and I had to spend the Rains Retreat in a monastery near the town. Sorrow, despair and resentment arose towards this foot-all because I was attached to tranquillity. I wanted to escape the confusion of the world; I really longed to lock myself in a tomb where my senses would not be stimulated, where no demands would be made on me, where I would be left alone, incognito, invisible. But after that I contemplated my attitude; I contemplated my greed for peace. And I did not seek tranquillity any more.

In Teachings of a Buddhist Monk Ajahn Sumedho’s wisdom and humour bring us right to the heart of Buddhist meditation and Theravada Buddhism.

From the foreword by Jack Kornfield

Ajahn Sumedho was ordained as a Buddhist monk in Thailand in 1967 and trained under the guidance of the highly respected Thai teacher, Ajahn Chah. He was the abbot of Amaravati Buddhist monastery in England for many years, but has recently returned to Thailand. His latest book is Don’t Take Your Life Personally.

You can buy Teachings of a Buddhist Monk  from:

All prices are approximate.