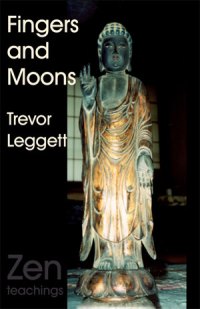 With many varied analogies, stories and incidents, Trevor Leggett points to the truth beyond words, beyond explanations and methods. Indeed, the book itself is like ‘a finger pointing at the moon’.

You can buy Fingers and Moons from the Book Depository for around £10.95 with free worldwide delivery. See below for other online sites.

The well-known Zen Buddhist phrase ‘the finger pointing at the moon’ refers to the means and the end, and the possibility of mistaking one for the other. Trevor Leggett says, ‘the forms are the methods and they are very important as pointing fingers, but if we forget what they are for and they become, so to speak, the goal in their own right, then our progress is liable to stop. And if it stops, it retrogresses.’ On the other hand there are those who say ‘with considerable pride, “I don’t want fingers or methods. I want to see the moon directly, directly . . . to see the moon directly . . . no methods or pointing.” But in fact they don’t see it! It’s easy to say.’

There is a saying about Kobo (ad 800) whose calligraphy is regarded, even today, as amongst the greatest examples of this highly developed art: ‘This won­derful calligrapher does not choose his brush. Kobo Daishi, Great Teacher Kobo, does not choose the brush.’

Trevor Leggett (1914 – 2000) has been a leading writer on Zen Buddhism in the West. He lived for a considerable time in Japan and was the first foreigner to obtain the Sixth Dan (senior teachers degree) in judo from Kodokan.  He wrote well-known books on the subject as well as many books on Zen, amongst which are A First Zen Reader, The Warrior Koans, Zen and the Ways, Yoga and Zen, and The Old Zen Master. He was head of the BBC Japanese World Service for 24 years.

You can buy Fingers and Moons from:

Buddhism Now is an online Buddhist magazine, giving advice on how to practise Buddhism.
Join 240,346 other followers