I received an interesting piece recently by Jamie Gargett—which follows this preamble—about the realm of the hungry ghosts on the Wheel of Life. I was therefore prompted to write this short introduction as a reminder of this fascinating teaching-aid.

Most will agree, I am sure, that the Wheel of Life never loses its value as an object of contemplation. It has everything in it as far as the Buddha’s teaching is concerned, and the Tibetans, among others, have used it since time immemorial. 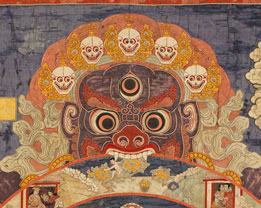 The first thing that one notices in these vivid Tibetan scrolls (thangkas), is the a large character representing the Lord of Death. He is shown holding up a great, round mirror. There is no physical face staring back at us, however, instead the reflection is of the experiences in our lives—all the possibilities open to us—in the form of a wheel.

There are six realms within this wheel—a heavenly realm; a realm of jealousy; an animal realm; a hell realm; a realm of hungry ghosts; and a human realm. In each, the Buddha is portrayed offering an escape, because none of these situations is totally satisfactory, not even the tranquillity of heaven. But this is the story of our lives. Sometimes we are like hungry ghosts—we can’t settle in our place; we always want something, or more of something—hungry for this or that. Or, we’re like animals—we live just for our own basic needs all the while, unconcerned with the needs of others. Occasionally—or more than occasionally—we enter hell and suffer the torment of grief, fear and anguish. From time to time, we’re also in heaven where everything seems to be just perfect, for the moment. Sometimes also jealousy takes us—we want what someone else has, and we want it now, or we at least wish they didn’t have it, anyway. And when we’re not obsessed or taken over by any extreme states of mind, we reside in a fairly harmonious, balanced state as a so-called sane, human living.

The realms are transitory and relate to feelings and conditions of mind. This is one of the basic points of this teaching; it shows us how easy it is to go from one state to another, or how impossible it is to remain in one of them, whether we want to or not. We find ourselves first in one condition and then in another—suddenly, often, without warning.

At the hub of the wheel are three creatures—a pig, a snake and a cock—each biting the tail of the other. These three represent the greed, hatred and delusion that dogs our lives. It is these which make the world go round. Remove one and the axis will collapse, bringing the wheel crashing down. 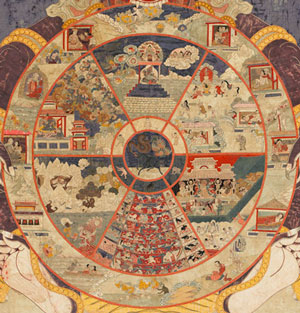 The figure of death holds up the mirror so that we can see our own reflections. It’s all just an image of our lives, our minds. Though it seems real while it’s happening, these ups and downs are just a mirage—true in one sense, but not in another. We’re in those realms, but we’re not. It’s like seeing one’s face in any mirror—there we are in the glass, but we know we’re not there, we’re really here in front of it. We don’t see ourselves here, however, we see ourselves there in the glass! We’re both on the wheel of life and death, and off it, simultaneously. We feel pleasure and pain, and yet can sense a separateness from pleasure and pain. We know birth, death and rebirth, yet were never born and will never die. Being unborn is part of our experience even if we’re happy or sad, even if we don’t notice it.

Zen Master Bankei once said that if we divide the day into three parts, we’d find that two-thirds are managed with the unborn. ‘Yet,’ he said, ‘without realising this, you imagine you operate entirely through cleverness and discrimination—a serious error indeed!’ And he continued, ‘As for the remaining third, unable to abide in the unborn, you change your buddha [awakened] mind for thoughts, attaching to things that come your way, so that even right in this life you’re creating fighting demons, beasts, and hungry ghosts, and when your life comes to a close, you fall right into the three evil realms.’ Bankei was referring to the jealous gods, the animal realm, and the realm of the hungry ghosts as the evil realms on the wheel of life, but he rounded it off by saying, ‘To believe the three evil realms exist after you die is a great mistake, a bit of far-fetched speculation.’

But the point about the Wheel of Life is that we’re supposed to use it as a reminder to remain aware of our states of mind. Where are we in right now? In the realm of jealousy? In the hell of anger or some other disturbing state? In a heavenly happiness? Or are we feeling fairly content right now, at peace with the world and in the normality of what is supposed to be the human condition? Can we identify the feelings and the state that we’re in as depicted by the Wheel of Life? It’s quite interesting to try. Then the changes become more obvious, the swings from one mood to another, one feeling to another. The Buddha, of course, tried to encourage us to come off the Wheel altogether, to separate ourselves from identifying with the thoughts and feelings that combine to bring the illusion of ‘self’, and the misery that goes with that.

Using The Buddhist Wheel of Life to change my life

Life as a Hungry Ghost is hard work! Most of our time is spent chasing after things we haven’t got, running around feeling unsatisfied, not paying any attention to the things already around. Emotional stability and inner peace play minor supporting roles in the Hungry Ghost’s life—unhappiness and emptiness get the top billing.

As an ex-Hungry Ghost myself I feel as though I have spent most of my own life searching for whatever the next thing is. Human beings, Demons, Animals, Devils and Gods—oh, and not forgetting Hungry Ghosts—are all segments of the Wheel of Life, according to my friend. Well, once he’d explained each segment and how all beings often spend time in one or more of them, as a Hungry Ghost I immediately decided that I wanted to be in a different segment! So, after our lengthy discussion, I went away with some ideas that my friend felt would help me break out of my life as a Hungry Ghost (my conclusion not his).

While working on these ideas, I found that people often slip in and out of the different segments. For example, those who are predominately in the Human Being realm can sometimes find themselves in the Demon realm and vice-versa. This highlighted one important point for me—although I identify as a hungry ghost I am not one! What I do is spend the majority of my time in this realm and have attached to it as an identity. So, then, what next? For me, the next step is to identify what realm I’m in when undertaking various tasks or dealing with different situations—this will then automatically place me in the realm of the Human Being, which could be described as the desirable place to be.

Well, to conclude this short reflection on using the Wheel of Life, I would like to report that I still get rather peckish at times and go off hunting for food to fill the void, and I still spending too much time in the Hungry Ghost realm, but I am now able to get some balance and understanding in my life, and this—for me—is a way forward.

You can read other articles by Diana St Ruth here

Like Loading...
‹ Know yourself, Mahesi Caplan
The Point of Intersection between the timeless and time, by Ajahn Sumedho ›