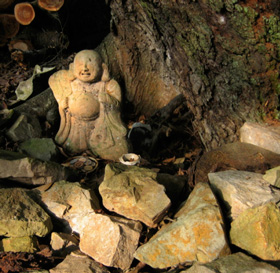 In this commentary on the koan Mu, Master Mumon says, ‘Concentrate yourself into mu, making your whole body, with its 360 bones and joints and 84,000 pores, one great question. Day and night, without ceasing, keep digging into it. Do not interpret it as “nothingness” or as “being” or “nonbeing.” It must be like a red-hot iron ball which you have gulped down and which you try to vomit up, but cannot. Cast away all delusive thoughts and feelings which you have cherished up to the present. After a while, your efforts will come to fruition naturally, and inside and out will become one. You will then be like a dumb person who has had a wonderful dream: he knows it within himself but he cannot speak of it. Suddenly mu breaks open and astonishes the heavens and shakes the earth . . . Then, though you may stand on the brink of life and death, you will enjoy the great freedom. In the six realms and the four modes of birth, you will live in the samadhi of innocent play.’

It’s not a matter of intellectually figuring out what mu is. To see muji you must put yourself completely into it until you are mu itself. Concentrate on muji until you and muji become one thing, and then keep on working. Then, as Mumon says, ‘suddenly mu breaks open1 and you will realize that from the beginning you are nothing but muji, the Buddha nature itself.

We call this experience shoken, the first barrier. Passing this first barrier is to experience the same realization that all the Buddhas and masters experienced themselves. But there are many degrees of realization — sometimes it is deep, sometimes shallow, sometimes the vision is clear, sometimes cloudy. In fact, usually this first opening is just a glimpse of the enlightened state. Having passed this first barrier, practice continues as you deepen, enlarge and polish this wisdom. We have a system of studying 600 or 700 koans; but you could also just continue with one koan. The point is not the number of koans, the point is to see clearly what this life really is. The Buddha Way is boundless, and its accomplishment and actualization goes on endlessly.

From the August 1989 Buddhism Now.

This article was first produced in The Zen Center of Los Angeles paper The Ten Directions in October 1981 and is reproduced here with their kind permission.