Fool the Devil, a story by Trevor Leggett 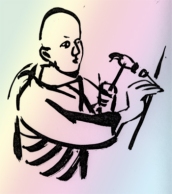 Now, there are about forty thousand Chinese characters in the total Chinese language. Nobody, of course, can possibly know them all, but they exist. The ordinary educated person knows, or used to know, some four thousand, and then the specialists know one or two thousand in ad­dition in their own field by which they recognize each other like magic passwords. Of course, the Bodhisattvas in China know them all; and the Devil knows them all too! He’s been around, and he’s got these forty thousand off — or he thinks he has!

One of the ways of baffling the Devil could  be seen occasionally in rural Japan. The idea is that the Devil comes along, he sees a house and he sees the name of the owner of the house (which has to be put up outside). Sometimes also there would be a devotional tablet with a spell on it, or something like that. So the Devil sees the name and he sees the tablet, and then he knows what to do to get in. If the actions of the occupants are inconsistent with what is on that devotional tablet, the Devil can get in. So, the trick was to write up the name in ordinary characters, and then on the devotional tablet to write up very complicated signs that looked like Chinese characters, but in fact were not; they simply looked like extremely complicated Chinese characters.

The idea is, then, that the Devil comes along, reads the name and thinks, ‘Oh yes, now the tab . . . oh! Can’t read that! This must be the home of some incredibly learned and probably holy man, and it would be very dangerous for me to try to get in,’ so he passes on because he can’t read the spell. But of course there is nothing there at all. The idea is to simply fool the Devil by his liking for something defi­nite.

From Fingers and Moons

Other posts by Trevor Leggett