The Middle Way, by Buddhadasa Bhikkhu 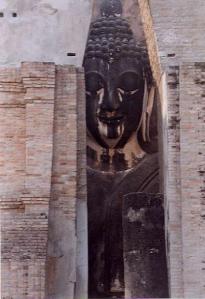 The bright mind is balanced and the defiled mind is imbalanced. When defilements (kilesa) come in, they take over. Then things are no longer in balance. And when the mind is out of balance, sometimes it goes off to the left, sometimes to the right, sometimes it goes up, sometimes down, or there is too much, or too little. This is what happens with defilements—the natural, pure balance of the mind is interfered with. This shows the importance of getting away from the influence of the defilements in order to live in the balanced Middle Way.

When the instincts are out of control, they become selfish, and this gives rise to all the defilements. The out-of-control instincts pull the mind off the Middle Way into the dead-end of the kilesa (the mental defilements). This is very important to know.

We often call these things the defilements, but we can see that they are just instincts which are out of control. Seeing this gives us an insight into how to bring them under control so that they no longer become defilements. This is something to be very interested in in order to get back on the path, to return to the balanced, right state of mind. To make it easier to understand, we can look at certain pairs of things which take us off the Middle Way.

The other extreme—off on the right—is the opposite. It is extreme dislike, hatred, aversion to things. We can hate ourselves, deliberately inflict pain, discomfort, and difficulties upon ourselves. Or we can hate or dislike lust. By attaching to this hatred of lust, we may deliberately try to damage the sensual organs, in the vain hope that lust will be destroyed.

The next pair is very similar to the first and is, basically, a metaphor to describe it.

The one extreme is to be soaking wet, to be drowning in sensuality, in sense-pleasures, greed and lust. This is to be sinking in the ocean of desire, to be all wet. The other extreme is to be burning—roasting until one is very dry and then begins to burn.

The third pair of extremes is to take some things as positive and others as negative. The positive are things we are satisfied with. Things which cause dissatisfaction we judge to be negative.

These are two kinds of attachment—attaching to things as positive and attaching to things as negative. This means that the mind stupidly goes off in one direction and clings to something as positive, or stupidly bends off in another direction and clings to something else as negative. Positive and negative are not the Middle Way; they’re attachment to extremes.

If we look at the world these days, we shall see that practically everybody has gone off into the positive. They have gone off track into satisfaction. This is a kind of slavery to the positive and causes problems. It also leads to hatred of the negative, and that causes other problems. The way has to be found to get out of these kinds of slavery and be free of both the negative and positive in order for the mind to be in the middle, to be balanced.

Neither of these are the balanced Middle Way. When the mind loses its balance, when the natural balance of mindfulness and wisdom have been lost, misplaced, or forgotten, then the mind sidetracks into the positive and the negative, pessimism and optimism. Going off into optimism is attachment of one kind, and going off into pessimism is attachment of another. The mind becomes a slave to optimism or pessimism, to these kinds of attachment. The mind is therefore no longer free, at ease, or balanced.

These extremes, these attachments of optimism and pessimism, are types of insanity, of craziness—the craziness of thinking everything is wonderful, and the craziness of thinking everything is terrible. Neither of these are the Middle Way, neither are correct, and neither allow one to live in accordance with reality, to live naturally according to the law of nature. We no longer see things as they really are; we don’t see the world as ‘only this’ or just-as-it-is, is-ness, suchness, just the way things are, what is what. When the mind is balanced, it sees the is-ness, the what is what of everything.

Without these separations, divisions, distinctions, there can be no extremes such as pessimism and optimism, or positive and negative. There is just this middle, this balance of the law of idappaccayata—this is, this becomes.

Now, let us look again at the pairs of opposites. As we all know, there are many of these. Good and evil, for example. Once again, when the mind is out of balance and is no longer in the middle, it takes sides and makes preferences. When something pleases us, therefore, or goes the way we want it to, we judge it to be good; it is evaluated as good in an unbalanced, selfish way. When something doesn’t please us, when it doesn’t go the way we want it to, that is judged to be evil. Neither of these are balanced because they are not seeing things as they really are, as just the process of idappaccayata (this is, this becomes). We then evaluate things as good and evil in a selfish, egocentric way. To be balanced, however, the proper way of phrasing this would be to say that the mind is above the meaning of good and evil.

The common person sees everything as they appear to him or her. Everything is judged according to dualism. All these pairs of opposites are believed to really exist as far as the mind of the common person is concerned. But this isn’t the truth. These common appearances—these views of the common mind—are not true or real. When we follow these appearances of dualism, this leads to attachment to good and attachment to evil, and this is death. This is what is meant in the second chapter of The First Book of Genesis.

Now, happiness also leads to various problems—getting tired by chasing after it, the frustration of not getting more, the fear that the happiness will go away, and so forth. Happiness itself, therefore, is not free of problems.

Unhappiness we have no doubts about—it always leads to problems, so we don’t have to give any examples of it. Both of these extremes, both of these kinds of attachment to what pleases and what displeases, causes all sorts of problems and difficulties. They tire us out, frustrate us, and confuse us. Neither are the balanced, Middle Way.

The next pair to look at is getting and losing, or profit and loss—when one thing happens and is judged to be to our advantage, and something else happens which is judged to be to our disadvantage. But when we start thinking in terms of profit and loss, and attaching to these terms, then the mind has fallen into deception. Winning and losing—everybody is attached to winning and nobody likes to lose. This creates all sorts of problems, because there is no realisation or understanding of idappaccayata (this is, this arises; this is, this arises; there is this, this becomes).

A further pair of opposites to consider is male and female. Making these distinctions and separations, and attaching to them, brings many problems. We make the separation of male and female where there is no real distinction, instead of just seeing the process of change which leads to certain things being called female and certain things being called male, change which keeps changing, which is never anything solid or static.

In order to see how this attachment to opposites arises, just look at time. Now, we divide time into day and night, and then we see day and night as opposite things. This is just our own stupidity in not seeing things as they really are. We think that day and night are completely different things, but it is merely the change of this thing we call time; it is just change according to idappaccayata (this is, this becomes); that’s all. In what we call day, there are these changes where there happens to be more sunlight, and then these changes continue and there happens to be more moonlight. But in this process of change, there is no real thing that we can attach to as day or as night. It’s only our misunderstanding which causes us to fall into this deception.

This is, this becomes

I would like you to become familiar with this word ‘idappaccayata‘ (this is, this becomes). Think about it, get to know it so that it is no longer a strange, unfamiliar word. When there is the realisation of idappaccayata, then there is no attachment to any extreme or to any of the pairs of opposites. The realisation, the experience and full understanding of idappaccayata will protect the mind; it will maintain it in the middle so that nothing can pull it out of balance, nothing can pull it out of the centre.

Buddhism Now is an online Buddhist magazine, giving advice on how to practise Buddhism.
Join 240,346 other followers