Home › Buddhism › What was the message of the Buddha? by John Aske

What was the message of the Buddha? by John Aske 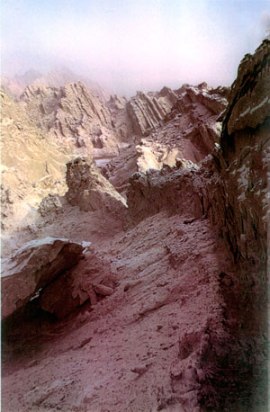 What was the message of the Buddha and almost all the other great teachers? Was it to found a religion? Old rituals and formal beliefs were things they would have understood but not necessarily taught; they were the normal cultural background in which they lived. Those things admittedly help people to construct a relatively moral and reflective life rather than the heedless rush to pleasure and burn-out which is so characteristic of the modern world but. important as they are, they are not conducive to liberation. What they were teaching was not a belief or a belief-system, but a description of how and what they were, and what that could mean for us, ‘The difference between myself and you is that I am awake to what I am, and you are not,’ said the Buddha. And Jesus said, ‘These things that I do, you shall do after me.’

When the Master Nangaku found his pupil Baso sitting determinedly in meditation, he asked him what he was doing, ‘I wish to become a Buddha,’ he said.

The Master picked up a tile and began polishing it.

`What are you doing?’ the pupil asked.

‘I am making a mirror,’ the master said.

‘You can’t make a tile into a mirror,’ the student said.

‘And you can’t meditate yourself into a Buddha,’ said the Master.

It’s not so much about becoming something, but much more about NOT becoming something; it is about that hardest thing—of just being oneself, and not the thousand and one identities one assumes in the course of one’s life.

Valuable as the rites and rituals are in people’s lives, and much as they help them to feel ‘at home’ in the world, they have a dark side—exclusivity and bondage—and far too often over the millennia, the excuse to kill those not of one’s own persuasion; the great university library at Nalanda (in the twelfth century) was not burned because it was the remotest threat to anyone, but because it promoted a search for truth not sanctioned by its destroyers.

Perhaps this is why Buddhism—almost the oldest of the great religions—has had so little effect on the others. It always stood against the dogmatic vilification of those of other persuasions. While the personal example of the Buddha has had incomparable power in promoting a vision of loving-kindness and compassion. The human qualities exemplified by the Buddha have vastly exceeded any dogmatic residues that Buddhism may have introduced. 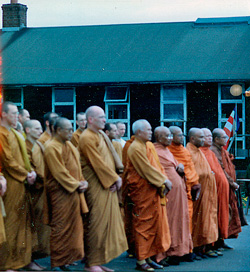 At the opening of the temple of Amaravati Monastery, a venerable Thai teacher gave a talk, in which he described how two members of the World Council of Religions (of which he was the Buddhist delegate) had scuffled and had to be ejected.

‘They were unable to distinguish between convention and reality,’ he said. ‘If someone were to pull off my robe and throw it in the mud and stamp on it, it could be washed, and no harm would be done. But if it had happened to them, they would have felt their religious symbols were being insulted, and they would have attacked whoever had done it. But these symbols are only conventions and have no absolute value. They are only a reminder of what really matters, which is not the symbol, but the reality.’

And this, alas, is what many people have been reduced to at the beginning of the twenty-first century. Whether they follow a flag or an ideology or a religion, insisting that everyone of whatever background must respect their symbols, often on pain of death, without conceding the least respect to the beliefs of those they wish to compel, the symbol begins to be seen as the reality, and the reality is ignored. They are so desperately attached to those symbols, that they believe that they (and everyone else for that matter) cannot survive without them and any harm that might come to them can only be put right by punishing or even killing those who caused the offence. But this attachment is precisely what the Buddha warned about, for, if you are bound to something, you are bound to that blind conditioned state which leads away from liberation and into death.

‘If there were not this unborn, unmade, unconditioned, there would be no liberation from the made, the born, and the conditioned,’ the Buddha said. He and all the great teachers wanted us to wake up to this one reality, without which all the symbols in the world are valueless. ‘Where is the kingdom of heaven?’ Jesus was asked. ‘It is all about you,’ he said.

Reality is not a symbol, we live in the midst of it, but our attachment to our precious symbols, and the other bits and pieces of the world prevents us seeing it. Imagine if all the symbols of all the great religions were absolute, and adherence to them a matter of life or death. Then to breathe, to look, to think would be the beginning of a mortal offence and our lives would be an unimaginable hell.

That is why the Buddha spent his life teaching that the only absolute was liberation itself, and why he smiled that legendary smile when asked about the infinite.

Like Loading...
‹ We are having a problem with our Theme
You Are Not A Permanent Person, by Ajahn Sumedho ›