Home › Buddhism › Some notes on Tantra, by Francesca Fremantle

Some notes on Tantra, by Francesca Fremantle

These Questions and Answers came after Francesca’s talk Tantric attitude to life, you might like to read it first.

Question: I have been interested in Tantra for some time, but all the books say that it is so complex, you can’t know anything about it unless you go away for about twenty-five years with a special lama, or something. So, how can one pursue it?

Answer: The way in which I am talking here about Tantra is a way of looking at it as an attitude, really, as a view of life. The actual practice of Tantra is, of course, a very specialised thing which has to be learnt from a lama. You have to have empowerments, and it takes a long time. Nevertheless, one can have a Tantric attitude, I think.

It is possible to do any kind of spiritual practice—not only Buddhist, but Christian or other kinds of practices—with a Tantric attitude, with the attitude of seeing the sacredness in life, of relating our ordinary everyday experiences to this kind of sacred experience. I think this is very important and can bring a great deal into anyone’s life, even if one is not, in a technical sense, practising Tantra.

On the other hand, it is equally possible to do Tantric practices with a very non-Tantric attitude, which is also done in certain circumstances. So there are two different things involved here.

A lot of Tantra is spoken of as secret. Now, it is not secret because it is deliberately kept secret or because it is kept away from people. Trungpa Rinpoche once described it as ‘self-secret’. Some things are actually impossible to understand until you are ready to understand them, which is rather like the very simple idea of emptiness. The concept of emptiness is a theory or an idea, and as such is pretty meaningless and difficult to come to grips with. Once you meditate and begin to have even a glimpse of this sort of loosening, however, then you may begin to know what emptiness might be. Even if one has not fully experienced it, one begins to feel what it could be. And that is exactly the process that takes place with Tantra. All these very complicated things are built on very simple direct experiences. The visualisations of Tantra aren’t suddenly imposed. You don’t look at a picture, learn all the complicated details, and then suddenly impose it on your experience. Instead, you very gradually grow into the feeling of it. 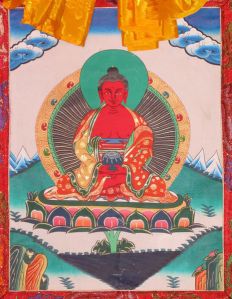 Let’s take the popular figure of Amitabha. You may more or less know what Amitabha looks like and symbolises, and you begin to have the feeling of the compassion of Amitabha. You begin to feel compassion in your own life and in the universe all around you. That becomes stronger and stronger. Then, by meditating on him and slowly visualising, it becomes more and more real and vivid. This is how even the most complex imagery starts—from a very simple feeling. It is the feeling that is the most important thing. The actual details of the visualisation are not so important.

Some people can visualise very easily, and some cannot. But the important thing is to have the feeling, to have the conviction that that feeling is in you, that that aspect of enlightenment is part of your own nature. This is how it goes; very simple really.

The huge complications of the Tantric rituals and visualisations have developed over the centuries. At the beginning I think it was much more direct and simple. Perhaps it can return to that again. But, naturally, over the centuries more and more enlightened people have had their individual visions and wanted to pass them on; their insights are embodied in certain visions and they pass these on to their students. But they all point to the one very simple experience.

It is not really necessary to have different initiations and practice all the different sadhanas. Some people go around collecting practices from different lamas. But to do just one takes an enormous amount of time. And even just a very simple one could lead you all the way. We are such complicated beings, our minds are complicated, so we seem to want all these different things going on. That is basically why they have developed.

Question: You mentioned William Blake at the beginning of this talk, which seems to imply that one can have the Tantric view of life without ever having heard of Tantra.

Answer: Yes, I think so. Of course, strictly speaking, it is the view part of it rather than actually doing Tantra. And there are some things about it that I do not think he would particularly have agreed with. But it is said that Tantra can arise anywhere in the world, under any conditions. I just think that so many things Blake said expressed the Tantric view. He also expressed things very vividly and in rather extreme terms, which is another characteristic of Tantric writing. This doesn’t necessarily mean that his words should be taken literally. For instance, Blake once said, ‘Sooner murder a baby in its cradle than nurse unfulfilled desires.’ Now, I’m sure nobody ever thought he really meant one should go and murder babies. Besides, from all accounts, he was an extremely kind and compassionate man. So there are poetic ways of expressing things, which occur in Tantric literature, that don’t necessarily have to be taken literally. We should rather try to understand the idea behind them.

Question: Is Tantra related to Hinduism?

Answer: Yes, it exists in Hinduism as well. The whole question of how Hindu and Buddhist Tantra developed and their interrelationship is very interesting. I feel that Tantra is simply one spiritual attitude and one movement. The actual practices are different, however, because they have a different basis behind them. Tantra possibly developed as early as the 2nd century, but things were not written down until about the 5th or so centuries. The real high point of Tantra was around the 7th and 8th centuries up until the 10th century. By that time Buddhism already had a very definite philosophy of its own, and this was considerably different from Hindu philosophy on which Tantra is based. Tantra itself is not particularly philosophical, but builds on the respective philosophies that are already there. It is really concerned with practice. And from the accounts of the siddhas [enlightened Tantric teachers] and others who lived at that time, it seems that it was really only the philosophers and theoretical people who worried about these differences. The actual yogis and siddhas who were practising didn’t care whether they were called Hindu or Buddhist, and many of the siddhas are in the legends of both Hindu and Buddhist traditions. There are some who are supposed to have practised Hindu Tantra by day and Buddhist Tantra by night, or the other way round, and they didn’t have any difficulty with that. However, some scholars, particularly, say that they should be definitely separated.

From a talk given at the Buddhist Publishing Group, Leicester summer school August 1994