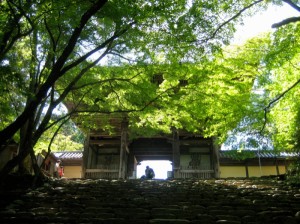 In our lives, we find we have entered into a labyrinth of conflicts and perplexities from which there seems to be no way out. Our nerves are frayed because of the complications of human relationships. Isn’t it at such a time that from the bottom of our hearts we de­sire to find peace and tranquillity by quietly seeking for the Way of Peace of Mind? It is when we become aware of our anxiety that we begin to sit in zazen.

Many people think Zen is something difficult. However, the Chinese character used for ‘Zen’ means ‘to demonstrate simplicity’. As this character implies, Zen is an extremely clear and concise teaching. Zen is also said to be the Buddha-dharma itself. The Chinese character for ‘Dharma’ is written with the components for ‘water’ and ‘to leave’. This implies that water flows from a high place to a low place. Zen, then, is to realise the Truth (the natural principles of things) which is completely separate from the judgement and intervention of the ego-self. Zazen is the shortest, most practical way to make the Way of Peace of Mind your own. The founder of Eihei-ji, Dogen Zenji, said that Zen is ‘the Dharma Gate of comfort and ease’. In other words, it is the Way of Peace of Mind. The only teaching of our Soto sect is to awaken to the fact that you already are within ‘the Dharma Gate of comfort and ease’.

There is a well-known story from eighth century China that I would like to introduce. One day, a monk named Baso Doitsu was sitting wholeheartedly in zazen. His master, Nangaku Ejo Zenji, saw him and asked him, ‘What are you doing?’ Baso answered, ‘I’m sitting in zazen because I would like to become a Buddha.’ Ejo Zenji picked up a piece of tile that was lying nearby and began to vigorously scrape the tile with a rock as if he were polishing it. Seeing this, Baso asked ‘Master, what is your intention in polishing that piece of tile?’ Ejo Zenji said, ‘I’m polishing this piece of tile in order to make it into a mirror.’ Baso was as­tonished and said, ‘Is it really possible to make a piece of tile into a mirror?’ Ejo Zenji replied, ‘Is it possible to become a Buddha by sitting in zazen?’ Hearing these words, Baso suddenly realised that he had been using zazen as a means or method to attain something. From then on, he was able to diligently sit in zazen without using it as a means to try to achieve a certain goal.

In the Soto sect, we use the expression ‘Shikantaza’. This means to ‘just sit’. It doesn’t mean that the zazen referred to as shikantaza has a certain fixed form. To ‘just sit’ means to be one with zazen to the extent that you forget ‘I am sitting’. In Buddhism, there is an expression ‘entering samadhi by listening, thinking, and practising’. From the standpoint of the practice of the Way of Buddha, this is very important and something that you must remember. This means it is necessary to listen carefully to the teaching of the Buddha and those who have transmitted the Dharma, think thoroughly about what you have heard, and then put it into practice. By following this sequence, you can enter samadhi (awaken). You must remember that Zen (the Buddha-dharma) begins first with listening to a true master speak about the Dharma.

One thing you must be careful about at this point is not to set up standards and then judge whether your practice of zazen is correct or incorrect, it is essential that by means of ‘just sitting’ you forget ‘just’, forget ‘having forgotten’, and forget ‘sitting’. Dogen Zenji used the expression ‘casting off body and mind; body and mind cast off.’ The expression ‘casting off body and mind’ means that by being one with a certain con­dition or circumstance, you assimilate all other things. It is said that for three years Dogen Zenji didn’t lie down to sleep and that he couldn’t recognise the faces of the monks who sat next to him. These words ‘casting off body and mind’ express the result of his ‘just sitting’. The other half of the above expression, ‘body and mind cast off’, refers to a condition where having forgotten the ego-self, everything disappears. This is all the splendid result of his having sat zazen single-mindedly.

By practising zazen, it is possible to come to hon­estly accept yourself as you are now. This means that you will be able to completely entrust yourself to the conditions of anxiety and dissatisfaction, without set­ting up standards of good and bad. Please be careful to understand that ‘entrust’ doesn’t mean it is all right to simply not do anything. Furthermore, it isn’t possible for us as human beings to think of two things at the same time. Consequently, when we are anxious, there isn’t the slightest possibility of thinking about peace of mind. When we are dissatisfied, whatever we see and hear is dissatisfying, and so again there isn’t even the slightest possibility of thinking about satisfaction.

It is important that we can live peacefully and not be disturbed by the circumstances of our lives, regard­less of whether they are favourable or unfavourable. In Buddhism, we say this is ‘dwelling peacefully within cause and effect’ and ’cause and effect are one’. In Soto Zen, this is also expressed as ‘practice and realisation are not two’ and ‘subtle practice of original en­lightenment’. Cause-condition-effect are always one and in a process of change that we call ‘trans­migration’. There is no substance at all within cause and effect. It is only because of the intervention of the ego-self that we think cause, condition, and effect are separate. When we experience this principle with our bodies and realise that essentially we never were de­luded, at the same time the thought of choosing be­tween this and that will cease and ‘seeking mind’ will disappear. This is called ‘awakening to the Self’ or ‘attaining true Peace of Mind’.

Harada Sekkei Roshi is the Abbot of Hosshinji in Japan, was the first General Director of the new Soto Zen headquarters in Europe, and is the author of The Essence of Zen.

The above article is from a talk entitled A Guide to the Way of Peace of Mind originally published in the Spring 2000 issue of Hosshinji Newsletter and reproduced here with their kind permission.