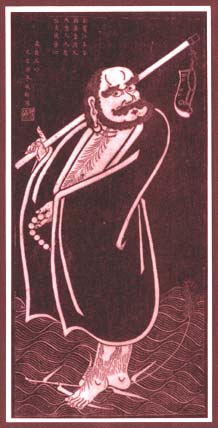 If someone is determined to reach enlightenment, what is the most essential method he can practice?

The most essential method, which includes all other methods, is beholding the mind.

But how can one method include all others?

But how can beholding the mind be called understanding?

When a great bodhisattva delves deeply into perfect wisdom,1 he realizes that the four elements and five shades are devoid of a personal self. And he realizes that the activity of his mind has two aspects: pure and impure.2 By their very nature, these two mental states are always present. They alternate as cause or effect depending on conditions, the pure mind delighting in good deeds, the impure mind thinking of evil. Those who aren’t affected by impurity are sages. They transcend suffering and experience the bliss of nirvana. All others, trapped by the impure mind and entangled by their own karma, are mortals. They drift through the three realms and suffer countless afflictions, and all because their impure mind obscures their real self.

The Sutra of Ten Stages says, ‘In the body of mortals is the indestructible buddha-nature. Like the sun, its light fills endless space. But once veiled by the dark clouds of the five shades, it’s like a light inside ajar, hidden from view.’ And the Nirvana Sutra3 says, ‘All mortals have the buddha-nature. But it’s covered by darkness from which they can’t escape. Our buddha-nature is awareness: to be aware and to make others aware. To realize awareness is liberation.’ Everything good has awareness for its root. And from this root of awareness grow the tree of all virtues and the fruit of nirvana. Beholding the mind like this is understanding.

1 Perfect wisdom. This is a paraphrase of the opening line of the Heart Sutra, where the bodhisattva is Avalokiteśvara and where perfect wisdom, or prajnaparamita, is no wisdom, because perfect wisdom is ‘gone, gone beyond, gone completely beyond’ categories of space and time, being and nonbeing.

3 Sutra of Ten Stages . . . Nirvana Sutra.When translations of these two sutras first appeared in the early fifth century, they had a profound effect on the development of Buddhism in China. Among their teachings are the universality of the buddha-nature and the eternal, joyous, personal, and pure nature of nirvana. Up until then, the doctrine of emptiness taught by the prajnaparamita sutras had dominated Chinese Buddhism. The Sutra of Ten Stages, which details the stages through which a bodhisattva passes on his way to buddhahood, is a version of a chapter by the same title in the Avatamsaka Sutra.

Reprinted from The Zen Teaching of Bodhidharma with kind permission from the translator Red Pine.

Buddhism Now is an online Buddhist magazine, giving advice on how to practise Buddhism.
Join 237,003 other followers