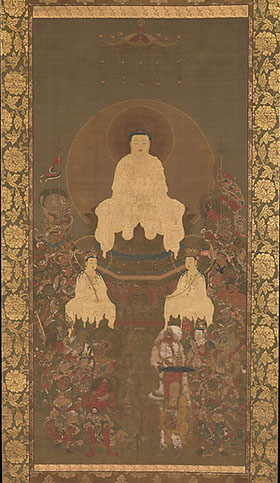 Now intuitive insight, or what we call ‘seeing Dhamma’, is not by any means the same thing as rational thinking. One will never come to see Dhamma by means of rational thinking. Intuitive insight can be gained only by means of a true inner realisation. For instance, suppose we are examining a situation where we had thoughtlessly become quite wrapped up in something which later caused us suffering. If, on looking closely at the actual course of events, we become genuinely fed up, disillusioned and disenchanted with that thing, we can be said to have seen Dhamma, or to have gained clear insight. This clear insight may develop in time until it is perfected and has the power to bring liberation from all things. If a person recites aloud: ‘anicca, dukkha, anatta’ or examines these characteristics day and night without ever becoming disenchanted with things, without ever losing the desire to get things or to be something, or the desire to cling to things, that person has not yet attained to insight. In short, then, insight into impermanence, unsatisfactoriness and non-selfhood amounts to realising that nothing is worth getting or worth being.

There is a word in Buddhism that covers this completely, the word ‘sunnata’ (emptiness), the emptiness of selfhood, the emptiness of any essence that we might have a right to cling to with all our might as being ‘mine’. Observation which leads to the insight that all things are devoid of any essence that is worth clinging to is the real core of the religion. It is the key to Buddhist practice. When we have come to know clearly that everything of every kind is devoid of selfhood, we can be said to know Buddha-Dhamma in its entirety. The single phrase ‘empty of self’ sums up the words ‘impermanent (anicca), unsatisfactory (dukkha) and not self (anatta)’. When something is perpetually changing, devoid of any permanent unchanging element, it can also be said to be empty. When it is seen to be overflowing with the property of inducing disillusionment, it can be described as empty of any entity that we might have a right to cling to. And when we discover on examination that it possesses no stable component whatever that could be ‘self,’ that it is simply nature, changing and fluctuating in accordance with the laws of nature which we have no right to call a self, then it can be described as empty of self. As soon as any individual has come to perceive the emptiness of things, there arises in that person the realisation that it is not worth getting or being any of those things. This feeling of not desiring to get or to be has the power to protect one from falling slave to the defilements or to any kind of emotional involvement. Once an individual has attained this condition, he is thenceforth incapable of any unwholesome state of mind. He does not become carried away by or involved in anything. He does not become in any way attracted or seduced by anything. His mind knows permanent liberty and independence, and is free from suffering.

The statement: ‘Nothing is worth getting or being,’ is to be understood in a rather special sense. The words ‘get’ and ‘be’ refer here to getting and being with a deluded mind, with a mind that grasps and clings wholly and entirely. It is not suggested that one could live without having or being anything at all. Normally, there are certain things one can’t do without. One needs property, children, wife, garden, and so on. One is to be good, can’t help being a winner or a loser or having some status or other; one can’t help being something or other. Why then are we taught to regard things as not worth getting or being? The answer is this: The concepts of getting and being are purely relative; they are worldly ideas based on ignorance. Speaking in terms of pure reality, or absolute truth, we cannot get or be anything at all. And why? Simply because both the person who is to do the getting and the thing that is to be got, are impermanent, unsatisfactory (suffering) and nobody’s property. But an individual who doesn’t perceive this will naturally think, ‘I am getting…I have…I am….’ We automatically think in these terms, and it is this very concept of getting and being that is the source of distress and misery.

Getting and being represent a form of desire, namely the desire not to let the thing that one is in the process of getting or being, disappear or slip away. Suffering arises from the desire to have and the desire to be, in short, from desire; and desire arises from the failure to realise that all things are inherently undesirable. The false idea that things are desirable is present as an instinct right from babyhood and is the cause of desire. Consequent on desire, there come about results of one sort or another which may or may not accord with the desire. If the desired result is obtained, there will arise a still greater desire. If the desired result is not obtained, there is bound to follow a struggling and striving until one way or another it is obtained. Keeping this up results in the vicious circle of action (karma), result, action, result, which is known as the Wheel of Samsara. Now this word ‘samsara’ is not to be taken as referring to an endless cycle of one physical existence after another. In point of fact it refers to a vicious circle of three events: desire, action in keeping with the desire, and effect resulting from that action. The inability to stop desiring leads to desiring once more, to action once more, and once again to another effect, further augmenting desire… and so on, endlessly. Buddha called this the ‘Wheel of Samsara’ because it is an endless rolling on. It is because of this very circle of events that we are obliged to endure suffering and torment. To succeed in breaking loose from this vicious circle is to attain freedom from all forms of suffering, in other words, Nirvana. Regardless of whether a person is a pauper or a millionaire, a king or an emperor, a celestial being or a god, or anything at all, as long as that person is caught up in this vicious circle, he is obliged to experience suffering and torment of one kind or another, in keeping with his desire. We can say then that this Wheel of Samsara is well and truly overloaded with suffering. For the rectifying of this situation, morality is quite inadequate. To resolve the problem we have to depend on the highest principles of Dhamma.

An Extract from Handbook for Mandkind

Like Loading...
‹ Imagine that one person wakes up from a dream, Acarya Shantideva
Dark Side of Life, by John Snelling ›

Buddhism Now is an online Buddhist magazine, giving advice on how to practise Buddhism.
Join 237,003 other followers