Home › Book reviews › Gathering of Intentions: A History of a Tibetan Tantra

Gathering of Intentions: A History of a Tibetan Tantra 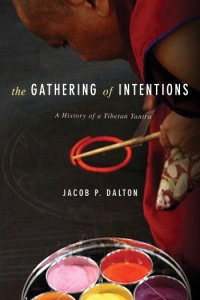 The Gathering of Intentions reads a single Tibetan Buddhist ritual system through the movements of Tibetan history, revealing the social and material dimensions of an ostensibly timeless tradition. By subjecting tantric practice to historical analysis, the book offers new insight into the origins of Tibetan Buddhism, the formation of its canons, the emergence of new lineages and ceremonies, and modern efforts to revitalize the religion by returning to its mythic origins.

When the tantras first arrived in Tibet, Tibetans were slow to compose full-blown commentaries on these esoteric works. In accordance with the texts’ rhetoric of secrecy and transgression, the imperial court prohibited their translation and circulation. Even after the empire’s gradual collapse in the late ninth century, early Tibetan tantric authors mostly limited themselves to scattered notes, short instructional texts and ritual manuals. The few early Tibetans to write longer commentaries stand out as conspicuous exceptions to the rule, and above all of them stands Nupchen Sangyé Yeshé, the great protector of tantric Buddhism during Tibet’s age of fragmentation. Born around 844 C.E. in Drak, in a valley south of Lhasa, Nupchen is said to have begun his study of Buddhism at nine years old under a visiting Nepalese scholar named Vasudhara. Four years later, at Vasudhara’s invitation, Nupchen made his first trip to Nepal and thence to India. According to our earliest biographical source, the Great seal of Nup, Nupchen’s authority derived from his seven trips to India and Nepal, where he met some of the top tantric Buddhist masters of the mid-to-late ninth century, Recognized repeatedly as a prodigy, he eventually studied directly under the “translators” of the Gathering of Intentions and returned to central Tibet a master of the tantras in his own right.

Today, hundreds of tantric ritual texts — both of the revealed (Treasure) and authored (spoken Teachings) varieties — are attributed to Nupchen, many bearing on the wrathful practices of Yamantaka, the slayer of the Lord of Death. But Nupchen’s two major compositions are somewhat less ritually focused. Far better known to contemporary scholars than Armor Against Darkness is his Lamp for the Eyes in contemplation. over 250 folio sides in length, the Lamp is almost entirely concerned with questions of doctrine, and specifically the differences vis-a-vis nonconceptuality — between the gradual and the immediate approaches to enlightenment, typified by Indian and Chinese forms of Buddhism, respectively, as well as the tantric teachings of Mahayoga and Atiyoga, or the Great Perfection (Rdzogs chen).

The ritual system explored in this volume is based on the Gathering of Intentions Sutra, the fundamental “root tantra” of the Anuyoga class of teachings belonging to the Nyingma (“Ancient”) school of Tibetan Buddhism. Proceeding chronologically from the ninth century to the present, each chapter features a Tibetan author negotiating a perceived gap between the original root text—the Gathering of Intentions—and the lived religious or political concerns of his day. These ongoing tensions underscore the significance of Tibet’s elaborate esoteric ritual systems, which have persisted for centuries, evolving in response to historical conditions. Rather than overlook practice in favour of philosophical concerns, this volume prioritizes Tibetan Buddhism’s ritual systems for a richer portrait of the tradition.

The Gathering of Intentions: A History of a Tibetan Tantra

Jacob P. Dalton is Khyentse Foundation Distinguished University Professor in Tibetan Buddhism in the Departments of East Asian Languages and Cultures and South and Southeast Asian Studies at the University of California, Berkeley.

The Gathering of Intentions from the Book Depository with free world shipping.