Home › Buddhism › For the Complete Ending of All Ill, by Phiroz Mehta

For the Complete Ending of All Ill, by Phiroz Mehta 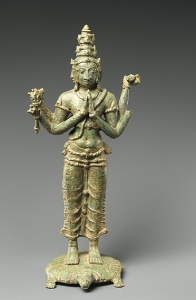 When a person was sufficiently moved by what the Buddha said, he would ask for ordination into the Buddhist sangha, the Order. The Buddha would then say, ‘Come bhikkhu, well preached is the doctrine. Tread the Brahmacariya, the Brahma path (literally, ‘walking in Brahma’) for the complete ending of all ill’ [In Buddhism, ‘Brahma’ is often referred to as ‘ultimate reality’.] This, of course, is a tremendous statement altogether: For the complete ending of all ill.

How is ill presented in Buddhism? In its external form, it is presented as jati (birth), as old age, decrepitude, death, as being associated with what one or whom one dislikes, and not being associated with those one likes, and so on. This is how ill is presented externally. This is called dukkha (suffering). But there is a profounder meaning to it, and that is that it is ‘far from the Infinite’ (kha, the Infinite, du, far from, spoilt, made bad). This, of course, straightaway leads us to the fact that our life here is not the expression of the Transcendent, of Perfection itself, of Nirvana. It is this fact that we have to deal with essentially. All these other things are secondary.

Old age, death, they just come, and the millions of the world take those things in their stride willy-nilly, intelligently or not so intelligently. So that is not so much the problem. Even the conflict, the misery we go through in life, is not so much the problem. The problem is that our life here is something limited, constricted, twisted, and in confusion. It does not express the Perfection of the Transcendent. This is the real pain, the real suffering, in the spiritual sense.

With thanks to the The Phiroz Mehta Trust

[Taken from an article entitled ‘Making a Complete End of all Ill’ published in The Phiroz Mehta Trust Newsletter, issue 108 December 2017.]

Like Loading...
‹ A Broken Broom, a Tattered Scripture
Do you know what this mind is? by Ajahn Chah ›