Click on any photograph below to view larger image. 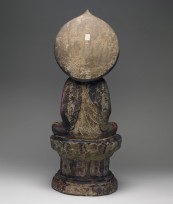 This finely detailed white marble sculpture — which, remarkably, retains most of its original polychromy — depicts the historical Buddha Shakyamuni, whose halo denotes his saintly status. The Buddha is dressed in monastic robes, which suggest his renunciation of the secular world to seek spiritual awakening. His right hand forms a mudra, or hand gesture, which signifies his pacification of fear and, in certain contexts, that he is in the midst of teaching. Comparatively rare in East Asia, white marble was often used for Buddhist sculptures produced in northern China under the Northern Qi and Sui dynasties. Almost all East Asian Buddhist sculpture, regardless of material, was gilded or polychromed; although the pigments obscured the sometimes precious materials, they imbued the image with a sense of lifelikeness, transforming the sculpture into a physical embodiment of the deity for use in ritual contexts.

Like Loading...
‹ Dogen is again questioning: What is moving and not-moving? By Shohaku Okumura
Fascination for our Mental Suffering. Corrado Pensa ›