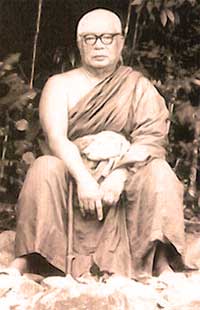 Buddhadasa Bhikkhu (Servant of the Buddha) became a monk in 1926. He established Suan Mokkhabalarama (The Grove of the Power of Liberation, Thailand) in 1932. He worked to explain the essential principles of what he called ‘pristine Buddhism’—the original realisation of the Buddha— before it was buried beneath commentaries, ritualism, and clerical politics. His work was based in research of the Pali texts, especially of the Buddha’s Discourses (Sutta Pitaka), followed by personal practise. He taught whatever he could say truly quenches dukkha (dissatisfaction, suffering). His approach was always straightforward and practical. Most of the monks involved in nature conservation and community development were inspired by him. He provided the link between the scriptural trad­ition and engaged Buddhist practice today.

After the founding of Suan Mokkh, he studied all schools of Buddhism, as well as the other major religious traditions. This interest was practical rather than scholarly. He sought to unite all genuinely religious people in order to work together to help, as he put it, ‘drag humanity out from under the power of material­ism.’ This broadmindedness won him friends and students from around the world, including Christians, Muslims, Hindus, and Sikhs. He died in 1993.

Other posts by Buddhadasa

Like Loading...
‹ The unborn does not come within the realm of time
Nirvana for Everyone, by Buddhadasa Bhikkhu ›

Buddhism Now is an online Buddhist magazine, giving advice on how to practise Buddhism.
Join 239,508 other followers