Home › Biography › The outside of people is no clue to what is inside, by Trevor Leggett

The outside of people is no clue to what is inside, by Trevor Leggett

Sceptics say that in meditation you’re simply sitting there and basically you’re dreaming, or falling asleep sometimes, and no more can come out of the meditation than you began with. This is put by Mephistopheles very powerfully in Goethe’s Faust. Faust sits in meditation and Mephistopheles comes up and he says, ‘You know, there you are; you’re like a sort of frog, blowing yourself up bigger and bigger and bigger, and at the end of it you’re just a frog and you’ll have to come down again, won’t you? Nothing new can come from the meditation. Maybe you’re not doing that much harm to anybody, but that’s about all that can be said.’

Now, one teacher gives this example — of course it’s a modern example. You have a magnet (the Romans and the Chinese knew magnets, so did the Greeks) and it hangs free. Something comes near it — attraction — but it can be repulsion — repulsion or attraction, one of the two. The teacher says, ‘They’re generally listed together in the classics, love and hate, because they both depend, in fact, on interest. You can’t hate someone you’re not interested in. And it means that the mind is charged, becomes a magnet. With most minds,’ they say, ‘it is simply a question of what is the nearest source of attraction or repulsion — to go to that, or to go away from that. Most minds simply revolve like that.’ And that was all the Romans saw. They hung up one of these natural magnets, these lodestones, by a thread, and they never noticed that if the magnet was isolated, it would gradually settle down and give a direction. The Chinese noticed it; they noticed that the magnet, if it was hung free in isolation, would give a direction. Of course the Chinese are so ‘different’ from us in every way that they called it ‘the south-pointing needle’. We know, of course, that it points north! Still, the principle holds. They discovered that if the magnet is sheltered from outside influences and is left long enough to settle down, then there will be new information and information which can save your life. And that is in everybody, not just in the brilliant, or the clever, or the eloquent, or the powerful, the strong characters, but in every­body.

In the Burma jungle, those who were going on the Chindit expeditions against the enemy were given little cigarette lighters and they were very, very poor; they were semi-rusty when they got them and the lighter wheels were very bad. They would just work, but only just, and would not be worth stealing because they were so poor. Underneath the wadding, however, there was a tiny little compass. So if the man was caught by some of the villagers and things were taken, they wouldn’t take that. To start with they would not have petrol for it, and, secondly, it was probably rusty. But inside was the secret, giving the north/south by which the man could escape from the jungle. It had to be made very, very poor, otherwise it would have been stolen from him.

Well, one teacher said that the burglar, when he’s looking for where the money is hidden, doesn’t go to the central place in the room; he digs in the coffee tin. Underneath all the coffee, there is the envelope with the £500 note — that’s where it is. Dirty, rusty, sort of coffee, stale coffee, and that’s where the treasure is, so that it won’t be easily discovered. And he said that we should think of that. The outside of people is no clue to what is inside, and there is a treasure inside.

The next point is about effort. There are two trains of instruction, which sometimes people notice. One is that in the highest consciousness, the highest awareness, there is no effort. And the other is, ‘You have to put your whole heart and soul into this.’ And some people will say, as one does when one wants to get out of something, ‘You’re told these things are effortless and you’re trying to attain them by making tremendous efforts. Isn’t it absolutely ridiculous? It’s a self-contradiction.’ So these people either go in for a type of meditation which practically is falling asleep, or else they go in for a furious sort of meditation, and never attain any calm at all.

The teacher again gives this example. He says, ‘You get home; you’ve been working very hard and you’re tired. You just manage to have your meal and, oh, you’d like to go to bed, you want to go to sleep. Going to sleep is no effort, but you have to make the effort to get up and go into the bedroom and turn back the sheets and get into bed and then, ahhhhh . . . ! But without those preliminary efforts you either won’t fall asleep because you’ll be uncomfortable, or you’ll sleep very badly. So,’ he says, ‘the efforts in meditation and in following the discipline are not in order to attain a new state of consciousness, but in order to remove the obstacles to that consciousness, just as it is not that getting up and going to the next room and turning back the bedclothes produces sleep, but doing so removes the obstacles to our natural sleep.’

In Japan inspiration has come through those who sit in silent meditation. We can think, ‘Oh, well, what can they produce?’ The Great Kobo Daishi, Great Saint Kobo, invented the Japanese alphabet in his meditation. And in this way the Japanese didn’t have to learn Chinese, but they could adapt the Chinese to the Japanese language. That could, of course, have been done by any very bright analyst, but Kobo, this great genius in AD 700, devised the alphabet to cover each of the syllables of the Japanese language once and once only in a rhyme, which is used today. And then he made that rhyme mean the essence of the lines, two lines, of the Nirvana sutra. It says that all things are transient; this is the law of all existence, but we can pass beyond that transience and be in the peace of nirvana.

The blossoms are fragrant,

But, alas, they fade.

In this world of ours,

Who can remain forever?

This day, crossing beyond the mountains of illusion We see no more shallow dreams, Nor are we intoxicated by them.

So in his inspiration he made a new alphabet, the first alphabet in the Japanese language, and it had this wonderful rhyme which puts the words of the sutra into poetic form. And to this day if you go to a traditional Japanese theatre, the rows are numbered, not A B C D E F G H, but as you enter you are reading, ‘The blossoms are fragrant, but, alas, they fade. In this world . . . Oh, this is my seat!’ Well, this was an example of wonderful genius which arose from meditation. Something entirely new in three fields came out of that and when people say, ‘Oh, meditation; you just go into meditation; nothing new, you come out the same as when you went in.’ No, such things can come out. The magnet becomes a compass when it’s isolated and gives you the true direction of north. 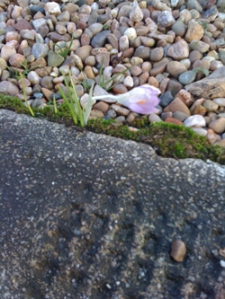 Now, one would like a Western example and there is one, but it’s not well known in the West because the West failed to recognize the genius. Christ died and gradually the popular belief grew up that he would come again, and he was to come again in AD 1,000, the first millennium. Now, as a matter of fact, the Pope in AD 1,000 was a really great man, one of the greatest men that the West has ever produced, Pope Sylvester II. But he is not well known. In the West, have you noticed, we apply the word ‘great’ to mass murderers, generally, starting with the mass murderer Herod the Great and going on to Frederick the Great of Prussia and Alexander the Great. And if you look through the history of the Greats in the West, I think you’ll find only two — Albertus Magnus (not very well known today as a medieval philosopher), and Pope Gregory the Great. But Gerbert, Sylvester II, was a most remarkable man. I don’t know of a life of his in English, but there is one In French. He went to Cordoba, met the Moors, brought back the Indian numerals and tried to get Europe to adopt them. If you’ve ever seen the calculations with the Roman system of numerals, which was then the way in which calculations were made, you’ll know the difficulties. For instance 7 x 7 is VII x VII and the answer is XLIX. Even professional accountants couldn’t memorise the tables of more than 5×5; they had mnemonics and special means of calculating. So the introduction of what we call the Arabic numerals, which are in fact Indian and came through the Arabs, would have been of immense benefit to Europe, as big a benefit as the introduction of the alphabet into Japan. He introduced them into the monasteries. He nearly united the Western and Eastern churches, and then they poisoned him. So, three or four hundred years went by before those numerals came in and the civilization of Europe could approach that of the Middle East. This was a great inspiration, as great as that of Kobo in Japan, but it was not accepted. It’s not simply a question of a genius coming along with new ideas, people are needed who can follow and understand that genius.