Home › Buddhist › Beginners › It’s all an adventure, by John Aske

It’s all an adventure, by John Aske

‘This is all wrong; that is how it should be!’ the nagging voice tells us. But where we are and who we are, will not be altered, no matter how much we wish it. As Spike Milligan said when someone asked him why he was down a hole: ‘Well, everyone’s got to be somewhere.’

We are part of the unfolding, and the unfolding is part of us. There is no one and nowhere else. Trying to be someone or somewhere else only prevents us from coping with where and what we are. Phiroz Mehta wrote about the state of sin as being ‘out of communion’, the ‘loveless state’, ‘not being sensitive to the living, changing truth of everything’.

The Master Hyakujo was once giving a talk to some of his monks, when he saw an old man who was invisible to everyone else. When the monks had gone, this old man told Hyakujo that he had once been a Master on that mountain when a monk had asked him about cause and effect. ‘The enlightened man is not subject to cause and effect,’ he had told him. And for this misguidance, this hanging on to absolutes, he was condemned to spend innumerable lives as a fox. The old man then begged Hyakujo to answer the same question. Hyakujo replied: ‘The enlightened man is one with cause and effect.’ At this the old man was enlightened and bowed. He then asked Hyakujo to give him a monk’s burial, and Hyakujo agreed.

We constantly fall out of communion with ourselves. I was once teaching English as a foreign language for a college that was about to move into a new building. I did not know that not all the classrooms were ready. I arrived late with a most important student who was paying a fortune for individual tuition. The only classroom remaining to me contained two broken chairs and a shattered table. Later, when I went to turn on the light, I found it was broken. I was grossly embarrassed. Gianantonio merely smiled and patted me on the shoulder: ‘Don’t worry, my friend, l’avventura, it’s all an adventure.’

Thank heavens he was Italian and could see the other side of things! It became a little key to living for me as well. ‘L’avventura: It’s all an adventure.’ Jean Klein said: ‘Although both freedom and non-freedom are concepts, to say “act as if you are free”, is very striking. It stimulates spontaneous acting, function without a doer.’ 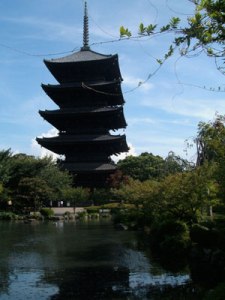 Never mind the broken chairs and the shattered table, and the light that didn’t work, it’s all an adventure, every bit of it, so we might as well enjoy it even when everything seems to be going wrong. In fact, the moments when it goes wrong are often the times to throw the doors wide and invite all the troubles in, the happiness, the despair. ‘Greet them with laughter,’ Rumi says, ‘Be happy that each comes to teach you of the wonder still to be discovered.’

When the old man was liberated from his travails, he realised that he and the adventure had never been separated. Later, they found the body of the dead fox, that master of mischief. The monk didn’t need it any more.

Click here to read other articles by John Aske.