To remind us of the rarity of a human life like ours, Shantideva used the following analogy:

Therefore the Conqueror said that just like
A turtle putting its neck through the hole
Of a yoke floating on a vast ocean,
A human life is extremely hard to find. 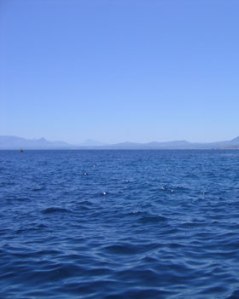 A blind turtle lives on the ocean bed and surfaces just once every hundred years. A golden yoke floats on the vast ocean, blown here and there by the wind. What are the chances of the turtle surfacing at just the right time and in just the right place to be able to put its head through the yoke? Our chances of gaining a life of freedom and fortune are just as improbable. You may think it couldn’t possibly be so difficult, but cyclic existence is like a vast and stormy ocean and we are like the turtle that spends most of its time in the depths and only surfaces very occasionally. For most of our lives we have been in bad rebirths and it happens only very rarely that we emerge from these into a good rebirth.

The yoke is made of gold and is therefore heavy, so it often sinks and is invisible. The yoke symbolizes the teachings of an enlightened one. An age of illumination is a period dur­ing which an enlightened one has taught in the world and those teachings are still extant, but there are much longer dark periods of time when the world is without such teachings.

The yoke does not remain in one place but is blown here and there by the wind. Similarly the teachings first flourish in one country and then in another. They thrive where people take an interest in practicing them and die out when they cease to be alive in people’s hearts. Sometimes the turtle comes up to the surface but in a place where there is no golden yoke. This is like taking a good rebirth but having no access to the teachings.

The turtle must actually put its head into the yoke, which signifies that the only way into the teachings is by taking refuge in the Three Jewels. Our lack of interest in the teachings and our reluctance to engage with them is due to our lack of intelligence, which is like the turtle’s blindness. No matter what good circumstances we enjoy, our life is not truly fortunate and free from obstacles if we have no interest in the Buddha’s teachings.

Don’t treat the story of the turtle merely as an amusing little fable, but allow it to act as a vivid reminder of how rare your present situation is. There are many good uses to which you can put your human life and when you are conscious of its true value, you will surely wish to choose the very best. What could be better than developing the wish to leave cyclic existence, the altruistic intention to attain enlightenment for the sake of others and the correct understanding of reality?

If we cannot point to anything we have done which has been genuinely constructive for ourselves and others, then from the point of view of the Buddha’s teachings we have wasted our time.

Despite what most of us see daily on our television screens or hear on the radio, we fail to realize how rare it is to enjoy a life of so much freedom, fortune and opportunity How long can we expect to live? We may die at sixty, or perhaps we will live to be seventy or eighty. A few people even live to be a hundred. How much of our life is gone and what have we done with it so far? Unless we have clairvoyant powers, we cannot predict when death will come. We may have another twenty, thirty or forty years left. If we are young, we may feel that most of our life is yet to come, but what if we are destined to have a short life?

If we cannot point to anything we have done which has been genuinely constructive for ourselves and others, then from the point of view of the Buddha’s teachings we have wasted our time. And unless we make some changes now, we will probably remain the slaves of our food, clothing, property and reputations for the rest of our lives. While these engross us, time passes and life will soon be over. No matter how long we live, we will never find time to practice.

In his Letter to a Friend Nagarjuna says:

Many things threaten life, which is even more
Ephemeral than a bubble of water full of air.
How amazing is the opportunity to exhale
After inhaling and to awake from sleep.

Meditation on impermanence and the imminence of death is certainly not a cheerful topic and may have a very depress­ing effect. All of us, except small children, know that since we have been born, we will certainly die. But merely think­ing about the incontestable fact that we will die is not what is known as meditation on death and impermanence. Instead think about the fact that from the moment you were conceived in your mother’s womb, you began dying and remember that there isn’t much time left.

Geshe Sonam Rinchen was born in Tibet in 1933. He studied at Sera Je Monastery and in 1980 received the Lharampa Geshe degree. He is currently resident scholar at the Library of Tibetan Works and Archives in Dharamsala, India, where he teaches Buddhist Philosophy and practice.

From The Three Principal Aspects of the Path
an oral teaching by Geshe Sonam Rinchen,
translated and edited by Ruth Sonam

Reproduced here with the kind permission
of Snow Lion Publications.