Soaked Up, by Trevor Leggett 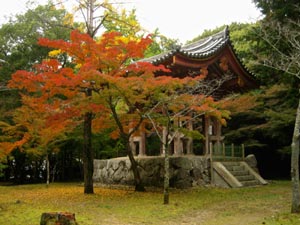 The translation could be—

Oh, the quietness.
The shrill voice of the cicada
Is soaked up by the stones.’

This is a temple scene. Suddenly in the quiet there is the bursting force of the shrill note of the cicada. It’s ear piercing while it lasts then it stops, and there is the moment when that shrillness is soaked up, soaks away into the stillness of the rocks, the stones, of the temple.

We can find some hints for yoga practice in certain arts which require a clear discipline, especially music. In music the execution has to be not merely perfect, but often in a very short space of time, and musicians have to practise everyday. One virtuoso used to say “If I miss my practise for one day, next day I notice a deterioration in performance; if I miss it for two days the critics notice it; if I miss for three days the public notice it.” Another would say: “In the first half hour, I am simply getting back to where I was when I stopped yesterday, after that I can make actual progress.

One of the great pianists of the twentieth century was Godowsky, his nickname was Buddha, because he rarely showed emotion in his playing. He used to be called the pianists’ pianist, and his music was very calm and beautiful. He did specialise in some amazing technical feats for instance putting two Chopin studies together and playing them almost simultaneously whilst still achieving musical effect.

But the main impression of his playing which was left on the public was this Buddha like calm. My father knew him and his family. Like my father himself, Godowsky would often get back late from a concert. He would have had a meal but arrived home at about 2am in the morning. Like the others he would get up late at about 10 or 11, have a cup of tea and a slice of toast and then without a word go to the practice room. He would do a couple of hours practise in the morning and then have lunch and more practise in the afternoon. At lunch, for the first time he would talk to the family. But before that they would hardly exchange a word.

My father told me the Godowsky family, by listening to what he played at the beginning, could tell what mood he was in that day. If he was in a good mood he would play sometimes a scherzo or caprice. If he was feeling dynamic or melancholy then the music would reflect that mood but they said this would go on for quarter of an hour or so and after that the music itself would take over – wonderful exhibitions of technique and interpretation, refining and changing, and refining again. By now there was no relation to the mood in which he had started. The music had taken over.

In our yoga meditation practise we may on some days be mortified, even when fairly experienced, that for the first fifteen minutes or so there is disturbance from where we have been or what we have done or what we are expecting or what we are fearing or hoping. Although we bring our mind back to the meditation subject again and again, it can be coloured by the atmosphere in which we have been living. But after a time, some say eight minutes and some say longer, the yoga meditation itself will take over and then it will begin to shine forth in its own glory, absolutely independent, irrespective of any personal memories or commitments or associations of any kind. Then we can become, like Godowsky when he was playing, a Buddha for a time.