Is Monasticism Necessary? By Ajahn Sumedho 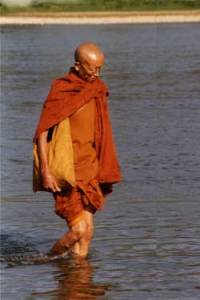 As Buddhism moves into the western world, the question is asked, ‘Is monasticism necessary? Do we really need monks and nuns? Maybe that old stuff worked in Asia but is no longer profitable?’ There is a lot of this, especially in the States, about it ‘no longer meeting the needs of modern people.’ But that is an opinion, a view, which can be argued and rationalised on both sides. You can see it as totally useless, or you can make a case for its absolute necessity. The point is not to take sides but to use the forms of Buddhism, when they are around, for mindfulness rather than for taking positions.

When I first saw a real, live, flesh and blood bhikkhu [a Buddhist monk], something in me felt very excited by it. I was in the Peace Corpse in Singapore at the time, and was sitting eating Chinese noodles one evening, when an orange-robed monk walked by. He just walked by in the distance. I didn’t talk to him or anything. But just that visual presence had a profound effect on me. Something in me resonated with it. I don’t know what it was, but it was a positive feeling. I later travelled in Thailand and Cambodia as a tourist and saw many Buddhist monks, but each time I could not help but feel tremendously inspired by their presence.

At that time, I thought that all Buddhist monks were Arahants. I was very naïve! But it doesn’t really matter whether they are Arahants or not; it’s how to use the presence, the form, that counts. It can be used for awareness rather than for following views and opinions. So, how do we use the things around us so that they awaken us or remind us? This, I find, is a very important matter. I live in a monastery and there are Buddha-rupas and so forth all around, and they help to remind one in a conventional way. But some people live in places where there are no such reminders. Other things can be used in a similar way, however, like churches, the sky, flowers; anything can serve to awaken the mind, to remind, rather than things just being seen through the worldly mind in the habitual way.

[The above is from a talk given during a retreat at Amaravati in May 1999. Courtesy of Amaravati Buddhist Monastery.]