The idea of writing a biography of a book: what a great idea. Well done Princeton University Press for coming up with ‘Lives of Great Religious Books’.

Lives of Great Religious Books is a new series of short volumes that recount the complex and fascinating histories of important religious texts from around the world. These books examine the historical origins of texts from the great religious traditions, and trace how their reception, interpretation, and influence have changed — often radically — over time.

The three we’ve looked at are: 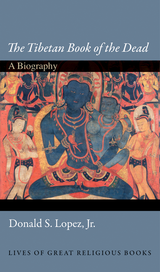 The Tibetan Book of the Dead: A Biography by Donald S. Lopez, Jr.

The Tibetan Book of the Dead is one of the most famous Buddhist text in the West, having sold more than a million copies since it was first published in English in 1927. Recently, the book has been adopted by the hospice movement. Yet, as acclaimed writer and scholar of Buddhism Donald Lopez writes, “The Tibetan Book of the Dead is not really Tibetan, it is not really a book, and it is not really about death.” In this introduction and short history, Lopez tells the strange story of how a relatively obscure and malleable collection of Buddhist texts of uncertain origin came to be so revered — and so misunderstood — in the West.

The central character in this story is Walter Evans-Wentz (1878-1965), an eccentric scholar and spiritual seeker from Trenton, New Jersey, who, despite not knowing the Tibetan language and never visiting the country, crafted and named The Tibetan Book of the Dead. In fact, Lopez argues, Evans-Wentz’s book is much more American than Tibetan, owing a greater debt to Theosophy and Madame Blavatsky than to the lamas of the Land of Snows. Indeed, Lopez suggests that the book’s perennial appeal stems not only from its origins in magical and mysterious Tibet, but also from the way Evans-Wentz translated the text into the language of a very American spirituality.

The Yoga Sutra of Patanjali: A Biography by David Gordon White

Consisting of fewer than two hundred verses written in an obscure if not impenetrable language and style, Patanjali’s Yoga Sutra is today extolled by the yoga establishment as a perennial classic and guide to yoga practice. As David Gordon White demonstrates in this study, both of these assumptions are incorrect. Virtually forgotten in India for hundreds of years and maligned when it was first discovered in the West, the Yoga Sutra has been elevated to its present iconic status — and translated into more than forty languages — only in the course of the past forty years.

White retraces the strange and circuitous journey of this confounding work from its ancient origins down through its heyday in the seventh through eleventh centuries, its gradual fall into obscurity, and its modern resurgence since the nineteenth century. First introduced to the West by the British Orientalist Henry Thomas Colebrooke, the Yoga Sutra was revived largely in Europe and America, and predominantly in English. White brings to life the improbable cast of characters whose interpretations — and misappropriations — of the Yoga Sutra led to its revered place in popular culture today. Tracing the remarkable trajectory of this enigmatic work, White’s exhaustively researched book also demonstrates why the yoga of India’s past bears little resemblance to the yoga practiced today.

The I Ching: A Biography by Richard J. Smith

The I Ching originated in China as a divination manual more than three thousand years ago. In 136 BCE the emperor declared it a Confucian classic, and in the centuries that followed, this work had a profound influence on the philosophy, religion, art, literature, politics, science, technology, and medicine of various cultures throughout East Asia. Jesuit missionaries brought knowledge of the I Ching to Europe in the seventeenth century, and the American counterculture embraced it in the 1960s. Here Richard Smith tells the extraordinary story of how this cryptic and once obscure book became one of the most widely read and extensively analyzed texts in all of world literature.

In this concise history, Smith traces the evolution of the I Ching in China and throughout the world, explaining its complex structure, its manifold uses in different cultures, and its enduring appeal. He shows how the indigenous beliefs and customs of Japan, Korea, Vietnam, and Tibet “domesticated” the text, and he reflects on whether this Chinese classic can be compared to religious books such as the Bible or the Qur’an. Smith also looks at how the I Ching came to be published in dozens of languages, providing insight and inspiration to millions worldwide–including ardent admirers in the West such as Leibniz, Carl Jung, Philip K. Dick, Allen Ginsberg, Hermann Hesse, Bob Dylan, Jorge Luis Borges, and I. M. Pei. Smith offers an unparalleled biography of the most revered book in China’s entire cultural tradition, and he shows us how this enigmatic ancient classic has become a truly global phenomenon.

As these stories of translation, adaptation, and inspiration dramatically remind us, all great religious books are living things whose careers in the world can take the most unexpected turns.

Of the three I enjoyed the I Ching biography by Richard J. Smith, the best. The Tibetan Book of the Dead was okay, Lopez came over a little negative, good read though.

From The Book Depository:

Like Loading...
‹ Suffering does have its good points, by Acarya Shantideva
The Long Way Home, by Sun Shuyun ›