Brothers and sisters in suffering, old age, sickness and death, by Ajahn Sumedho 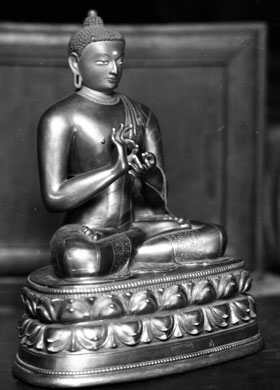 The Buddha pointed to an existential truth. It’s about existence. Suffering (dukkha) is about our human existence. And the actual meaning of `exist’ is to `stand forth’. What stands forth for us in our lives is suffering, isn’t it? We suffer a lot. We have a lot of existential suffering on this journey that we’re involved in from birth to death. And this suffering is common to every human being. It’s not just certain ones — it’s not just the poor, or just men or just women, or just Europeans or Africans or Asians — it’s everyone from the beginning of the human race, and will be to the end of it. As long as there’s ignorance, there’s going to be suffering. So this is a common experience we all share. When we talk about suffering, we don’t say, `I believe in it,’ or `I don’t believe in it.’ We know it because we suffer. You don’t have to believe in it — you already know you suffer. You have to believe in things you don’t quite know yet.

This realm that we’re born into as human beings is a conscious realm. And this consciousness is the ability to know things; it’s the experience of knowing. The reflective mind that we human beings have that allows us to reflect and contemplate our own existence, our own suffering — this is what we call `the Buddha’ — the ability to know and see things as they are, and to use wisdom, to see according to wisdom rather than according to belief or bias or prejudice. So it’s like a gnostic path. The Greek word `gnostic’ is related to the Pali word `nana’ which is insight knowledge, direct knowledge. The western world has not developed direct knowledge. The Gnostic forms of religion were persecuted and destroyed by the Catholic Church.

It has now been proven by modern scientists that there is no such thing as pure objectivity. It was believed at one time that one could be objective — a pure objectivity totally unaffected by anything. And it is possible, but only in when one is mindful, when one is seeing the objects as `what arises, ceases’. That is pure objectivity — the purity of the mind with no cultural additives, prejudices, angles, distortions, filters, positions, and no axe to grind.

In mindfulness you begin to observe all the cultural conditioning as the impermanence of your own language, your own thoughts, your own attitudes, your views of yourself, views of the world, opinions, emotions — all of these are witnessed as anicca-dukkha-anatta (impermanence-suffering-nonself). That is seeing in objectivity. That is a pure objective seeing, knowing. And it is through mindfulness and wisdom, which are not conditioned. They’re not conditioned and they’re not cultural. You can’t even say they are Buddhist, or anything. They are beyond any of those kinds of concepts.

By looking at suffering, therefore, and understanding it, we develop this way of knowing the truth. And then there is the realisation of cessation and the development of the path. It’s a way of realising God, or realising truth. The teachings are excellent teachings. They’re not dogmas or beliefs. They’re even stated in such a way as to encourage us to reflect with them rather than just to grasp them. People still grasp Buddhist teachings, of course, and become Buddhists rather than liberated enlightened beings. So people do become Buddhists by believing in Buddhism, but the actual practice the Buddha gave is a direct path of liberation here and now. That’s why, as you practise more and more, you find there is no suffering. The suffering the Buddha pointed to is through ignorance. 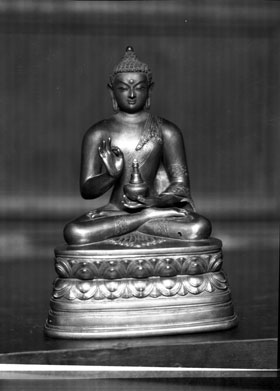 The above is taken from a talk given during a retreat at Amaravati. Courtesy of Amaravati Buddhist Monastery.

Like Loading...
‹ Two Tibetan works on Chan from the Tenth-century
Meditation In Daily Life — emotional states, by Bhante Bodhidhamma ›