Shakyamuni Descending from the Mountain

Shakyamuni renounced the world and went into the mountains to become an ascetic when he was twenty-nine years old. Unable to reach enlightenment even after six years of rigorous austerities, he departed in great disillusionment. He resolved to continue his search, not by challenging his physical endurance but through disciplined meditation. 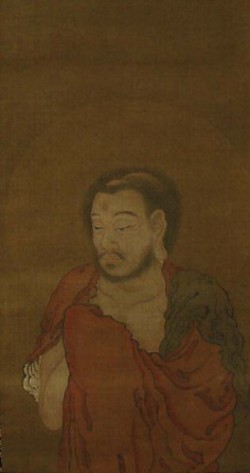 This subject developed importance only in the practice of Zen Buddhism; it was neglected by all of the other sects, which instead emphasized the glory of the Buddha’s final enlightened state. Zen Buddhists saw in this episode the ideal of Shakyamuni as teacher: his sincere and high-minded striving, despite its initial fruitlessness, served as a model for their own practice. It was customary in Zen temples to venerate images of Shakyamuni descending from the mountain, or of Shakyamuni undergoing austerities, on 8th December [Rohatsu], the traditional date of the Buddha’s enlightenment. This unusual half-length portrayal departs from the traditional, more narrative convention that depicts a full figure of Shakyamuni descending from the mountain. Instead, it adopts the format used for portraits of Zen masters, which focuses attention on the facial features. Here, these reveal a man exhausted and downcast but unwavering in his resolve.