© 2012 Bhikkhu Bodhi, The Numerical Discourses of the Buddha:
A Translation of the Aṅguttara Nikāya.
Reprinted by arrangement with Wisdom Publications, Inc.,
wisdompubs.org. From number 51 (1) One’s Own Mind 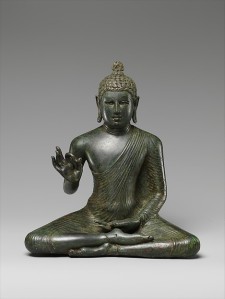 “Venerable sir!” those bhikkhus replied. The Blessed One said this:

“And how is a bhikkhu skilled in the ways of his own mind? It is just as if a woman or a man, young, youthful, and fond of ornaments, would look at their own facial reflection in a clean bright mirror or in a bowl of clear water. If they see any dust or blemish there, they will make an effort to remove it. But if they do not see any dust or blemish there, they will be glad about it; and their wish fulfilled, they will think, ‘How fortunate that I’m clean!’ So too, self-examination is very helpful for a bhikkhu [to grow] in wholesome qualities.

“But if, by such self-examination, a bhikkhu knows: ‘I am often without longing, without ill will, free from dullness and drowsiness, calm, free from doubt, without anger, undefiled in mind, unagitated in body, energetic, and concentrated,’ he should base himself on those same wholesome qualities and make a further effort to reach the destruction of the taints.”

© 2012 Bhikkhu Bodhi The Numerical Discourses of the Buddha: A Translation of the Aṅguttara Nikāya. Reprinted by arrangement with Wisdom Publications, Inc., wisdompubs.org.

Like the River Ganges flowing down from the Himalayas, the entire Buddhist tradition flows down to us from the teachings and deeds of the historical Buddha, who lived and taught in India during the fifth century B.C.E. To ensure that his legacy would survive the ravages of time, his direct disciples compiled records of the Buddha’s teachings soon after his passing. In the Theravāda Buddhist tradition, which prevails in Sri Lanka and Southeast Asia, these records are regarded as the definitive “word of the Buddha.” Preserved in Pāli, an ancient Indian language closely related to the language that the Buddha spoke, this full compilation of texts is known as the Pāli Canon.

At the heart of the Buddha’s teaching were the suttas (Sanskrit sūtras), his discourses and dialogues. If we want to find out what the Buddha himself actually said, these are the most ancient sources available to us. The suttas were compiled into collections called “Nikāyas,” of which there are four, each organized according to a different principle. The Dīgha Nikāya consists of longer discourses; the Majjhima Nikāya of middle-length discourses; the Saṃyutta Nikāya of thematically connected discourses; and the Aṅguttara Nikāya of numerically patterned discourses.

Ven. Bhikkhu Bodhi is an American Buddhist monk from New York City, born in 1944. He obtained a BA in philosophy from Brooklyn College and a PhD in philosophy from Claremont Graduate School. After completing his university studies he traveled to Sri Lanka, where he received novice ordination in 1972 and full ordination in 1973, both under the leading Sri Lankan scholar-monk, Ven. Balangoda Ananda Maitreya (1896-1998).