Home › Buddhism › The Illusion of Attainment, by Kusan Sunim

The Illusion of Attainment, by Kusan Sunim

Translated from the Korean
by Martine and Stephen Batchelor

To pride oneself on any slight degree of knowledge that may have been attained is likened to killing oneself as well as all the Buddhas and patriarchs. It is incorrect to base one’s life upon the fragments of understanding which might occur upon reaching certain states. The ancients of the past have always emphasized that one should never cling to such slight attainments. For if there is something which has been attained, then there is also something to be lost. In order that nothing may be lost, all sense of attainment has to disappear as well.

As long as we remain deluded, we tend to worry about our delusion. So we start diligently to practise meditation. After a while we may experience something which in fact is very insignificant — about as faint as the glow of a firefly or as tiny as the eye of a needle. But simply because what we are experiencing is something we have never heard of or seen before, we wonder, ‘Ah! this must be it!’ We are then liable to start saying that we now really know something and are even enlightened. To regard such an experience as final will result in our living and dying in vain. Therefore, even if we do have some slight attainment, we should not give it any importance!

Whatever happens we must exert ourselves until we realise the true goal of the practice. And this practice is simply one of diligently applying ourselves to the difficult task. This difficult task — which is quite different from all other tasks we consider difficult — is that of enquiring vividly into our fundamental hua-t’ou.

The ancient masters have often spoken of the hua-t’ou ‘No’ (Chin. Wu; Jap. Mu). Among all hua-t’ou, ‘No’ is considered to be the easiest. The Chinese Master Mung Shan stated that ‘No’ is the very bone-marrow of the Buddhas and the vital pupil of the patriarchs’ eyes. In one of his Dharma lectures, Korean Master Taego Pou put it like this:

‘”No” does not mean that something either is or is not the case. Nor does “No” refer to a state of complete non-being. So, where is its meaning to be found? In uttering “No” the entire body should fall away. Thus, when investigating the hua-t’ou “No”, one does not do anything.’

Although we are endowed with the nature and wisdom of [Hua-t’ou: Lit. ‘head of speech’ in contradistinction to thoughts which are the ‘tail of speech’; a shortened version of a koan — a fragment of the story, used for meditation. For example, ‘Mu’ is the hua-t’ou of the first koan in the Mumonkan. A monk asked Joshu, ‘Has a dog the Buddha Nature?’ Joshu answered, ‘Mu.’ the Buddhas of the three worlds, why is this true nature and wisdom of ours obscured and today we are leading the lives of ordinary sentient beings? It is because of the six thieves (i.e. deluded sense con­scious­nesses) which proceed from the six roots of the senses. [Sight, sound, smell, taste, touch, mind.] We have to protect ourselves well against these six thieves. Thus although we may have eyes, we should not see anything; although we have ears, we should not hear; although we have a nose, we should not smell; although we have a mouth, we should not speak; and although we have a body, we should not be con­cerned about the clothes we wear.
Can you really distinguish between good and bad, right and wrong with your intellect? To do so is to mutilate yourself. Thus the doors of the six roots must be tightly closed. When they are firmly shut, even if you do something, there will be nothing being done. But you should not even give rise to the thought that there is no doing.

Now, why is it necessary to empty the mind in this way? Because if you are held back by even a single thought, the eighty-four thousand defile­ments will still arise. There­fore, Taego Pou said, ‘One does not do anything.’ Since what is past is gone, thoughts of it are forgotten. And any thought of what is yet to come does not occur. When all thoughts of past and future have been cut off, there will also be no thought of the present.

But is such a state of emptiness a good thing? It sometimes happens that a prac­titioner who has been medi­tating on a hua-t’ou for a while becomes dazed. His hold on the hua-t’ou becomes weak and dull; all thinking stops and he finds himself in a quiet and vacant state. He sits very still and his body feels extremely relaxed. Even if he sits all day, he will not be aware of any pain in his legs; and at night he will not be aware of sleep. Occasionally the body is entirely forgotten and there is no consciousness of either the existence or nonexistence of the world. Such a person just sits in utter quiescence. Of course, one might think that such emptiness is very good. But in fact it is a mistake to think that one is truly practising, should one slip into this empty and vacant state.

At this point the practitioner finds himself at a very difficult stage. Although he may try to go forward, he cannot. And if he wants to go back, he cannot do that either. Neither is he able to go to the right or the left. It is indeed a very difficult period. Yet under no circumstances should he give rise to the thought that he has gained any realization or attainment. He must just continue holding firmly on to the hua-t’ou and enquiring very earnestly.

When coming, the hua-t’ou is coming; when going, the hua-t’ou is going. Only when such a state is maintained throughout the twenty-four hours of the day in all of the four positions can the practice truly be said to be advancing. Although you sit all day, there is no sitting; although you sleep all night, there is no sleeping; and even if you eat all day and night, nothing will have been eaten. Now the hua-t’ou is one-pointed and you reach the stage where it becomes a single homogenous mass. This is a very good sign. But now there is the danger that you may think that you have attained enlightenment. It would be foolish to say that yet. 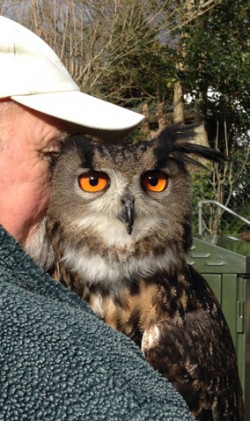 At this stage one’s practice truly starts to get under way. Prior to this time one had never really taken hold of the hua-t’ou. Thus to have dwelt upon some little experience one may have had when in fact the hua-t’ou was absent was just a state of foolishness far from the true Way. Only now can one say that the hua-t’ou has come into one’s own hand. At this time nothing further can be added and nothing can be taken away. Now it is important to practise correctly and never let go of the hua-t’ou. In fact it is as though one is taking up the hua-t’ou afresh.

At this time how should one take hold of the hua-t’ou? One must turn inwards and look back. But this looking back is not that of the physical eye but of the mind’s eye. In earnest one must enquire into what Chao Chou (Jap. Joshu) meant. Why did he say ‘No’? One must behave like an old mouse entering the horn of a cow. Attracted by the smell of food, the mouse crawls into the horn without any thought of danger. But then it gets stuck and cannot move either forwards or backwards. Likewise, one must take hold of the hua-t’ou without any care for living or dying.

When you practise in this way all thoughts of sleeping, eating and even dying will be forgotten. One just dwells single-pointedly on the hua-t’ou to which one has to awaken. Everything completely falls away — even the thought of awakening itself. If you pen­etrate the hua-t’ou with great determination, the path of words is cut off and any place for the mind to dwell disap­pears. It now becomes very transparent, bright and clear. At this time the mature person no longer has any doubts about the words of the great masters. But upon awakening in such a way, the time has come when he must go and see a realized teacher to determine whether his awakening is genuine or not. This is the moment when one has to cut and polish one’s understanding with a good teacher. Yet to people who do not know, one does not say a word. One behaves like a dumb and stupid person. Upon meeting someone else who also knows, a simple movement of the eyes is enough for each to recognize the level of the other’s understanding. In these ways such people respect one another.

[From a lecture given by Ven. Kusan in the summer of 1969
at Songgwang Sa Monastery, Korea.]