Zen Master Harada Tangen Roshi,
of Bukkokuji  in Obama, Japan,
died on the 12th of March, 2018.

Harada Tangen Roshi, one of the great Zen teachers of Japan, has died aged 93. Having survived WWII as a kamikaze pilot*, he adopted the practice of Zen Buddhism, eventually becoming a teacher to thousands of students worldwide. He was a warm, kind, spontaneous man who devoted himself to teaching meditation and sharing his insights into life. He emphasised the central Buddhist teachings of mindfulness, simplicity, compassion and selflessness and implored his students to lead a life devoted to helping others.

Tangen was born on 24th August 1924, in Niigata Prefecture, Japan. His mother had been warned that she would not survive the birth of this child and so was advised to abort the pregnancy and save herself. She went ahead nonetheless and her subsequent death would be Tangen’s first experience of true sacrifice. For the rest of his life he believed that his mother protected him.

In 1944 Tangen volunteered for the Japanese Air Force as a kamikaze pilot and completed one year of intensive training. On 15th August 1945 he prepared to make his final flight from Harbin in Manchuria, China. After the traditional cup of sake, he was about to board his plane when Japanese Emperor Hirohito’s voice announced over the loud speakers that Japan had surrendered. Tangen remembered running down the runway, screaming in anger and disbelief, unable to comprehend that he could not complete his mission of sacrificing his life for family, friends and country.

Following the war Tangen was interned in a Russian POW Camp. One day a Russian Officer invited him into his office, placed a bottle of vodka on the desk and suggested they drink. When Tangen declined, the officer pointed a gun at his head and demanded that he drink. He drank so much he became very ill and had to be hospitalised. During this time the rest of his group was transferred to another camp in Siberia where they all perished. Though he never drank again Tangen remained forever grateful to alcohol for the role it played in saving his life.

Tangen returned to Japan in 1946 suffering severe mental anguish. Despite surviving the war he felt only despair and pain at the loss of his comrades and the apparent meaningless of their deaths and confusion about the purpose of his life. Someone suggested he visit a Zen Buddhist teacher named Harada Sogaku Roshi** at a temple called Hosshin-ji in the town of Obama, about 100 km north of Kyoto. Hosshin-ji had, under the guidance of Sogaku Roshi, gained a reputation as a place of strict Buddhist practice. Sogaku Roshi did a great deal to revive authentic Zen practice in Japan during the early 1900s and would exert a profound influence on the way Zen Buddhism has been transmitted to the West.

At their first meeting, Tangen realised he had met someone who could help him. Sogaku Roshi told him that he understood his suffering but that he could come to understand the purpose of his life and that he could know true peace. He told Tangen that his comrades and friends ‘had not died’, they had ‘not gone anywhere’, and that if he practised hard enough, he would realise this for himself. Sogaku Roshi said that if he was prepared to become totally selfless, then he could solve his problems and answer the questions he had about life and death: ‘He said that if I really wanted to understand the meaning of life, eternal life, then it would take all the determination and effort that I could muster,’ Tangen later recalled. 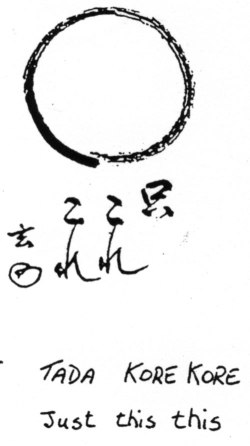 With this in mind, Tangen hurled himself into his practice with fierce determination forsaking all physical comforts in his quest to understand Sogaku Roshi’s teaching and the true meaning of Buddhism. For the first three years he refused to lie down to sleep, instead sitting in meditation through the nights. At one time he was so disgusted with his own self-centredness that he punched himself in the face and dislocated his jaw.

Tangen practised under Sogaku Roshi at Hosshin-ji for ten years, eventually ordaining as a Buddhist monk. In 1955, Sogaku Roshi formally recognised Tangen’s understanding of Buddhism and appointed him a Zen teacher. He sent him to the nearby dilapidated old temple of Bukkoku-ji to continue his practice and begin teaching. The then 31-year-old Tangen rose at 4 am each morning for meditation, spent the days rebuilding and repairing the temple, conducting ceremonies, going on begging rounds to raise money, before sitting in meditation until late at night.

People interested in Zen Buddhism and meditation began arriving at Bukkoku-ji, from all over Japan and then gradually from around the world. Tangen accepted anyone, including foreigners and women, who wanted to learn and practise Zen meditation. He freely shared his teaching and insights and provided the tools and environment to enable people to achieve their own understanding. The practice was strict and intense. Tangen drove his students hard, encouraging them to let go of their self-centred thoughts, to practise contentment and gratitude for everything, and to devote themselves entirely to the present moment, the ‘Here and Now’. He would repeatedly remind his students that ‘all life is One’, ‘everything is Good’, and that ‘there is no separation between “self” and “other”, no “birth” and no “death”’. He emphasised the importance of ‘waking up to True life’, of seeing life ‘as it truly is’ rather than through our self-centred discriminating minds. He tolerated no selfishness, and instead encouraged everyone to live a life devoted to helping others. He was a simple, kind, happy man, who lived his teaching.

Tangen Roshi taught and practised at Bukkoku-ji for almost 60 years. During that time thousands of foreigners and Japanese spent time with him, some for just a few days or weeks, others for months or years. He also received a constant stream of guests and visitors who sought his advice and help with every conceivable problem and difficulty. His teaching struck a chord with almost everyone who met him and, not surprisingly, resonated deeply with westerners searching for truth, meaning and happiness in life. 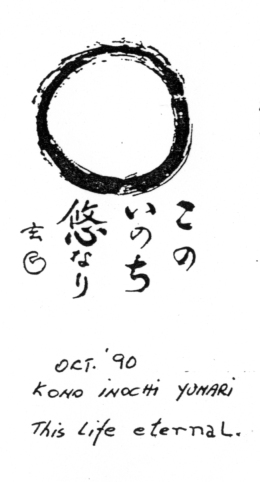 In his 70s Tangen began suffering from Alzheimer’s and various physical ailments, though he continued to teach, give public talks, receive guests and conduct ceremonies until his mid-80s. He died on 12th March 2018. When asked one day what happens at death he replied, ‘absolutely nothing’, and that in reality there is no birth and death, that life does not give and then take away. He would remind his students that although his body may die, he was ‘not going anywhere’ and that we are all ‘eternally young’.

With the decline in genuine Zen practice in modern Japan, authentic teachers have become increasingly rare. Harada Tangen Roshi was one such teacher and he will be mourned worldwide.

Written by Simon McInnes,
Student of Tangen Roshi and resident at Bukkoku-ji 1998-2005

* The war ended just when he was about to fly.
** Roshi, meaning ‘venerable old teacher’.

Like Loading...
‹ What is your original nature prior to the manifestation of space? Master Kusan
The Depth of Truth is Bottomless, by Harada Tangen Roshi ›