Branching Streams Flow in the Darkness 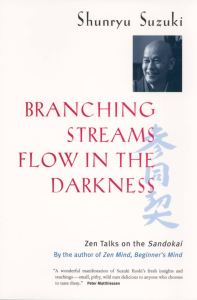 Zen Talks on the Sandokai

The classic Shunryu Suzuki work, Zen Mind, Beginner’s Mind, is known to many Buddhists irrespective of their favoured tradition, and it keeps going after thirty years—quite a feat, especially in these days of the ruthless publishing practice of not keeping books in print unless they are selling truckloads. Then, last year a book about Suzuki’s life and teachings appeared called Crooked Cucumber. That immediately created great interest from the untold readers of that earlier book. And now another volume has come into being. This is different again. It is a series of twelve talks given in 1970 on an ancient Chinese poem called the Sandokai by Sekito Kisen.

`Suzuki Roshi died on December 4, 1971, of cancer, a year and a half after delivering this teaching on the Sandokai,’ observes Mel Weitsman in his introduction, `He was sixty-seven. He must have had a premonition of his coming death when he said that Zen teachers in the Soto tradition often lecture on the Sandokai toward the ends of their lives.’

There are two introductions by the two editors. The second, by Michael Wenger, plots out the background of Sekito Kisen and puts him into context for us historically. Apparently, there is little known of him apart from this work. He lived between 700-790 and was a young disciple of Hui Neng. He was also thought highly of by Dogen who took Soto Zen to Japan five centuries later.

Sekito’s poem itself takes up just two pages. The title, Sandokai, has been translated as The Harmony of Difference and Equality, and that makes me want to read on. Then comes the talks. Even though they are based on the Sandokai, they are, of course, vintage Suzuki:

The main purpose of the Sandokai is to explain reality from two sides. As I said, san means `many’; do means `one’. What is many? What is one? Many are one; one is many. Even though you say `many’, the many things do not exist separately from each other. They are closely related. If so, they are one. But even though they are one, the one appears to be many. So `many’ is right, and `one’ is right. Even though we say `one’, we cannot ignore the various beings like stars and moons, animals and fish. From this point of view we say that they are interdependent. When we discuss the meaning of each being, we may have `many’ things to discuss. When we conclude that reality is in fact just oneness, the whole discussion will take place in this understanding of the unity of one and many. [p.40/41]

Discussions which follow each talk also prove useful in expanding the teachings of Suzuki:

Student: Whose voice is it that we listen to?

Suzuki Roshi: Your voice and Buddha’s voice. That is what the Sandokai is talking about. You sometimes think it is your voice, but it is Buddha’s voice. Your thinking comes from a one-sided feeling. You think you are here. You think you are Joe or Mary, but actually it is not so, not at all. I think I am Suzuki, but if someone calls me Suzuki, I feel very funny. `Oh is this Suzuki?’ The first reaction is `No, I am not Suzuki.’

A Zen book I heartily recommend.

See more posts on the Sandokai.

Buddhism Now is an online Buddhist magazine, giving advice on how to practise Buddhism.
Join 239,728 other followers