Home › Ajahn Chah › I took the snoring as my meditation subject, by John Aske

I took the snoring as my meditation subject, by John Aske 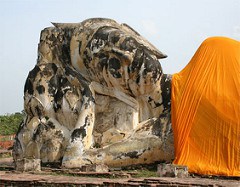 There can be few sounds more maddening than snoring — someone else’s snoring I mean. A few years ago I put up a friend, who was between flats and who had just embarked on a university course. He had the back room and I had the front, where my books were.

Then, one night, an acquaintance appeared at my door, dishevelled and in a broken state, with nowhere to go. I didn’t want to put him up as well, as I had already parcelled out the rooms – all two of them – but I felt sufficiently concerned to do so — an old Hampstead custom. Unfortunately, he smoked like a chimney and drank like a fish. And when people do that, they apparently snore very loudly due to damage of the soft palate.

I told him he could sleep on the sofa, hoping he would soon go. He didn’t. He apparently liked the hospitable atmosphere. He stayed. Each night, before I could get to sleep, the sound began to build up, until it reached a thunderous crescendo. Sleep was virtually impossible. However tired I was, the roaring would wake me. I took to keeping a long shepherd’s crook beside my put-you-up, and reaching across the room to poke him in the ribs when the noise became intolerable. For a while, a blessed short while, the dreadful noise would stop, but then begin again like an ingenious torture. Within a few days, I was a wreck. I was working at the polytechnic and part of my job was dishing out chemicals, some of them lethal. In my battered state, one slip might have caused the deaths of half of Transylvania — those that were not already dead that is. I wondered if the Count snored in his box. Action had to be taken.

Earplugs didn’t work. Sleeping pills were ineffective. Death almost seemed preferable to continuing as things were. What could I do?

Then I remembered Ajahn Chah’s remark to a meditator who had complained about the noise of a bell: ‘It’s not the bell interfering with you, it’s you interfering with the bell,’ he said. There was my answer.

I took the snoring as my meditation subject, and watched as my mind went through its dramatic raging about the noise, about unwelcome guests, about life, the universe, and everything — and amazingly I fell asleep. From then on, I adopted the same master plan and proceeded to sleep like a log. I still find it astonishing that even snoring can be the gateway to the pathless land. Just imagine!