The Collected Works of Chinul. Translated with an Introduction by Robert E. Buswell, Jr. University of Hawaii Press, 1983 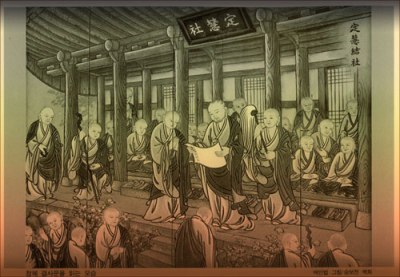 Chinul (1158-1210) was one of Korea’s most important and influential Son (Ch’an) masters. As a young monk he was dis­heartened by the overall worldly attitude of his fellows who were, on the whole, only interested in name and fame. He was also disgusted by the strong sectarian climate of his age. So he and a handful of other monks made a pact that after their training ‘they would go off into the wild, form a Samadhi and Prajna Society, and live in retreat. That actually happened about ten years later.

Chinul was greatly influenced by such masters as Hui Neng, Shen Hui and Ta-hui. He was also influenced by the Avatamsaka Sutra and a little known Chinese commentator on that sutra, Li T’ung-hsuan. Chinul’s writings strove to bring the two main schools of the time, Ch’an and Hua-Yen, together. We are told in the Introduction to The Collected Works of Chinul that when he lectured on dharma, his preference was for the Platform Sutra of the Sixth Patriarch. And when he ex­panded on that, he used Li T’ung-hsuan’s Exposition of the Avatamsaka Sutra and the Rec­ords of Ta-hul.

Chinul teaches the import­ance of sudden awakening fol­lowed by gradual cultivation. This is, of course, not a new or radical teaching — it was made much of by the early Zen Patriarchs and especially by Hul Neng’s disciple, Shen Hui. Chinul explains that sudden awakening is to see the mind as it really is — Buddha — and then to cultivate or live the Buddhist way of life by letting every­thing function freely, directly, from the unborn Buddha mind. He makes the point that one doesn’t really start treading the path until after such an awakening has taken place.

Chinul really brings this teaching of sudden awaken­ing/gradual cultivation to life by making the point time and again that mind is Buddha, that every action we take is the action of Buddha, and that every thought is the thought of Buddha. He hammers the point home with brilliant teachings and similes:

From: The Collected Works of Chinul. Translated with an Introduction by Robert E. Buswell, Jr. University of Hawaii Press, 1983 pp 208-209

This is a vibrant, dynamic work which I could hardly put down. It contains eight discrete pieces in all, along with an informative introduction to Korean Son, extremely helpful footnotes, an index, and a glossary. It is such a great book that I believe it deserves to become a standard work along­side the other few Zen classics we have in English.

From the April 1989 Buddhism Now

Update: the hardback is now out of print.
The paper back renamed  Tracing Back the Radiance:
Chinul’s Korean Way of Zen
(Classics in East Asian Buddhism)