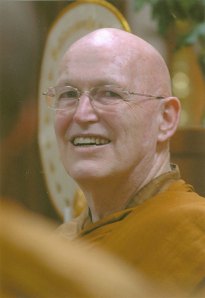 Ajahn Sumedho has retired from his abbotship and duties at Amaravati Buddhist Monastery. The Kathina ceremony on Sunday 14th November was an appropriate occasion which marked his official ‘goodbye’, and the temple was packed to overflowing. He will leave the country towards the end of this month (November) when, as was announced by the incoming Abbot (Ajahn Amaro) he will depart on a one-way ticket to Thailand.

Many of us were truly sad to be saying goodbye to him ― not only because of his powerful and engaging teachings which we have valued so very much over the past forty years — but also because he was a genuine friend in the dhamma, a genuine Buddhist friend. His commitment to living the Buddhist life which he has given himself to fully allows him ― even when his back is against the wall, as he would say, ― to ‘trust in awareness’ and let life unfold as it will.

In his time in Britain, Ajahn Sumedho has taken on massive commitments and responsibilities in the organisation of monasteries and the setting up of the Bhikkhu-sangha and the Siladhara-sangha. It was a tremendous undertaking which he stuck to throughout, thick and thin.

For many of us ― and there are many of us (perhaps more than he knows) ― his departure is an unexpected and sad, sad event, and our thoughts of goodwill and gratitude go with him on his continuing journey in life. 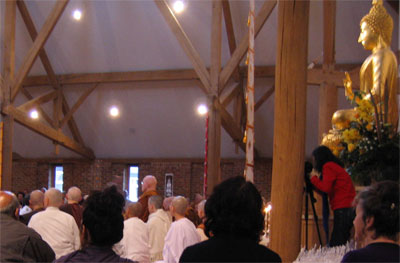