Home › Buddhist › Beginners › Mindfulness is not thinking, by Trevor Leggett

Mindfulness is not thinking, by Trevor Leggett 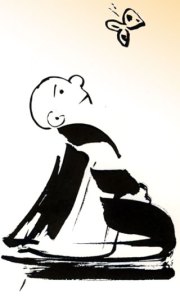 Mindfulness is not thinking, this is one of the reasons it is so powerful.

It is a common view that mindfulness is thinking — Now I’m walking. Now I’m talking. Now I’m not walking or talking, but just standing. Now I’m sitting down... It is just like a running BBC commentary. But, as a matter of fact, words cannot describe these things. Words can never describe what you do when you walk. There is only the actual living experience. If you say ‘walk’, does that mean the toe comes down first, the heel comes down first, or the foot comes down flat? The living experience is awareness of it all, but words can never describe it.

Mindfulness in words — trying to make an internal commentary of what one is doing — is just a kind of illusion. It can be compared to putting into words something that cannot be put into words, and that is not at all what is meant by mindfulness. The best example that I know is in relation to music.

Musicians themselves have words. When musicians hear music they automatically score the main theme in their heads, and if they have perfect pitch, they are uneasy until they have fixed it as A or B flat. They have words for the ‘Revolutionary’; they would say: It starts with a dominant seventh chord on G but in the first inversion, then there is a series of four-note descending passages, also the dominant with a leading-note accidental, and then there is a tremolo in the bass C and G. So, there is something that they can say, but it doesn’t really describe the music.

This can shed light on Buddhist teaching in practice because here too, in fact, there are no words. Musicians know, practitioners know, but trying to formulate it in words is not much better than trying to describe the ‘Revolutionary Study’ in words.

We can learn other things from music. You do not hang on to a chord, however beautiful. You do not regret the end of a piece of music. The piece is played and comes to a natural end. In the same way, a life is played.

In one of Beethoven’s Sonatas, the variations get higher and higher, faster and faster, but at the end of the rushing demisemiquavers, suddenly, the score says quasi-religioso, as if religious, and then comes a very, very quiet restatement of the theme, and it ends in silence. We do not feel: Oh, how tragic! All those wonderful notes, that tremendous dexterity, the speed, and now all he can play is this simple theme. No, this is part of the sonata; it is not something to be regretted.