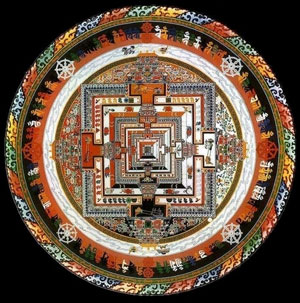 Pushing and shoving, I came to realize, is part of a Tibetan monk’s way of life, but there was nothing malicious about it. On the contrary. To see young monks struggling to get into the main gompa at Drepung early one morning when the Dalai Lama moved from Ganden in the middle of his stay was a sight indeed! The object, it seemed, was to get into the gompa itself where His Holiness was about to give a puja. The main doorway was completely blocked with a sea of maroon spilling out, down the steps and onto the surrounding area below. But there was a side door which was still being bombarded by younger monks to the obvious displeasure of the disciplinarians who were straining to lash out with long sticks. But their blows were mostly ineffectual, failing to find the mark. The whole crowd cheered as yet another monk hitched up his robes and climbed up the little wall and over the railings which flanked the doorway. These young ones continued to surge forward and the packing of bodies became even tighter — a little frightening to see. Not one more human being could be accommodated in that space and so when yet another one tried, the obvious happened — he was transported like a bird through the air on the raised hands of those beneath him, and in. A wave of laughter swept through the crowd. Then another one did it, and another. They were swept through that doorway as though down a plughole, to the utter delight of the crowd. The odd blow of a flailing stick mattered little to these tough youngsters who got the prize — inside, witnessing a colourful puja with high lamas and the greatest of them all, the Dalai Lama. It would certainly do you no good to come to a Kalachakra Initiation at Mundgod, or probably any other gathering of this nature, if you didn’t like being touched. Everything was boisterous, jokey, speedy and physical. And it was clear this was the way it was meant to be, especially when it came to tea time! Woe betide the unsuspecting soul who got in the way of a dashing monk with a teapot. And they dashed in groups! Tea time at Kalachakra was a sight to behold. How else are thirty thousand people going to get their cuppas in such a short time unless it is with great speed? Besides, this was obviously a time-honoured custom and one performed, as with most other things it seemed to me, with joyful vigour.

We ‘foreigners’ I’m ashamed to say, did not always take it in good heart. So what if we couldn’t hear because the interpreter was speaking in soft reverent tones and the short-wave radio produced little more than a hiss? This was not a Kalachakra for Westerners; this was for Tibetans and we were accommodated graciously and with honour. 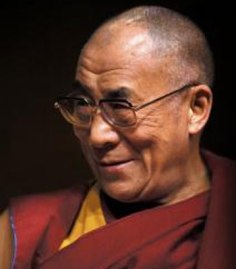 We had been given a space at the front, just to the left of the Dalai Lama, so we got a good view. Though there were only about a hundred or so of us and our space would certainly have been big enough, but monks had infiltrated, which left us short of space and, in many cases, short of temper too. ‘I’m actually not prepared to sit in there today. The fights which took place yesterday were just incredible,’ said the English lady with an air of dejection and resignation as she risked being relegated to the back of the thirty thousand. And I heard others complain too that the mood of the foreigners (our lot) was ugly, and one wondered where the spiritual side of an event like this actually came in. I found a space in the gangway, as did others, but, of course, these gangways were to be kept free, especially when it came to teatime, and then you were likely to be trampled on by the teapot carriers as they charged forward at a given signal. One German lady bedecked in black leather and studs with a shaven pate, was not at all happy when a heavy carefree foot clipped the side of her hand unexpectedly. I’m sure it must have hurt and she was mad. She wanted revenge and stuck her foot out at intervals calculated to trip up the charging groups, but her efforts failed. I couldn’t help wondering why she didn’t just get out of the way, which would have been easy enough. I am sure the monk who stood on her hand had not done it deliberately, but she was definitely not going to enter into the spirit of the thing. We Westerners in general were a miserable crowd — territorial and grumpy, fighting for every inch of space.

‘I feel incredibly lucky to be here’ — an Australian voice said — she was in the minority! And a Californian couple spent ten days entranced without hearing a word. For me, it was the fifth day before I gave up trying to listen to the whispered tones and simply listened to the richness of the Dalai Lama’s voice. And it occurred to me that the deep centre of oneself can be awakened, simply by the rich chanting of thousands of monks.

I did wonder from time to time whether Richard Gere and Koo Stark could hear any better from their vantage point under cover of the gompa immediately behind the Dalai Lama—a place for VIPs, but when my travelling companion, Gill Farrer-Halls of Meridian Trust, had the good fortune to join them one day prior to a videoing mission, she assured me the sound wasn’t much better there. So we were all in the same boat, except they weren’t sitting dirty and sweaty in the steaming heat.

My body took the initiations, but my intellect knew nothing about it. Perhaps that’s how it should be? In any case the Bodhisattva vows I apparently took still need to be kept. Finally, the Dalai Lama gave a long life empowerment. And food offerings were piled mountainously high — packets of biscuits, sweets, crisps, and fruit piled separately. I couldn’t help thinking it would have been better to have left the crisps in the packets, and I could only imagine it as a solid mountain of food dust. After the empowerment, the Dalai Lama withdrew and a long life puja for the Dalai Lama proceeded, as did the distribution of food. Missiles of balls of sugared tsampa, crisps and biscuits flew through the air to land in the lap, or all over you.

It was nice to see the Tibetan families enjoying this most auspicious event with their beloved leader amongst them, perhaps in some way feeling like a nation again.

.. A big man, he sat in a chair in the corner of the courtyard and we smiled to one another frequently as I wended my way to the ‘bathroom’ and back. He had an enormous cane which he used to help to totter to the same place…

‘I heard that the director of Phara House died last night at about 3 o’clock in the morning,’ said Nathan as we drove away in the taxi heading for the railway station.

‘The big man who sat in a chair in the corner of the courtyard.’

The strangest feeling came over me as I contemplated how I had come into his field of consciousness in the last few days of his life and he’d used up some of his very last smiles on me. And I suddenly felt differently about the joyful chanting of the monks I’d heard earlier that evening which, it turned out, was a puja for the old monk. One minute an old Tibetan monk in India; the next all cleared away and on to the next thing, whatever that may be …