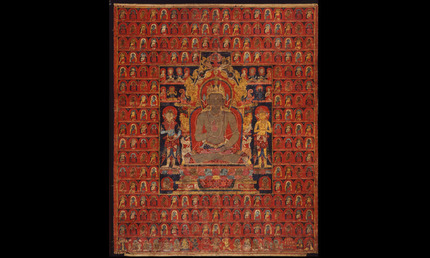 Mandalas are geometric maps of Himalayan Buddhist visionary worlds, created by and for practitioners of Vajrayana Buddhism (“Lightning Vehicle” Buddhism), a system of meditation that is profoundly dependent on art and artists. Minutely detailed and saturated with philosophical meaning, these mandalas (most often paintings or sculptures) are a feast for the eyes and the mind. 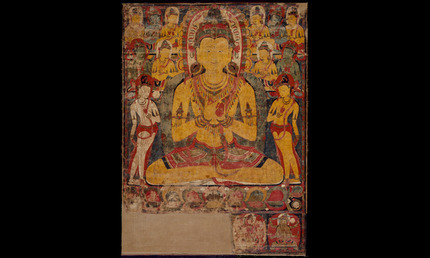 Beginning March 14, the Asian Art Museum will configure 15 artworks from the museum’s collection to transform its Tateuchi Gallery into a three-dimensional mandala for the special exhibition Enter the Mandala: Cosmic Centres and Mental Maps of Himalayan Buddhism. On view through Oct. 26, Enter the Mandala creates a mandala that can be entered physically, which is one goal of Lightning Vehicle meditation itself. Museum visitors who “enter the mandala” will get a virtual taste of what it might be like to find oneself inside its nested geometries.

For Buddhist practitioners, mandalas are not just images to view, but worlds to explore—after recreating the image in their mind’s eye, meditators imaginatively enter its realm. A mandala’s basic form can be described as a quincunx, a centre surrounded by four symbolic directions, like the five spots on a dice. In Lightning Vehicle Buddhism, each direction is presided over by a colour-coded Buddha, each of whom represents a psychological defect (pride, delusion, frustration, hatred and lust) and the means of its transformation into fuel for enlightenment. By reciting the verbal formula (mantra) and forming the hand gesture (mudra) of the Buddha who epitomizes a practitioner’s characteristic defect, the meditator transforms that defect into a corresponding insight. 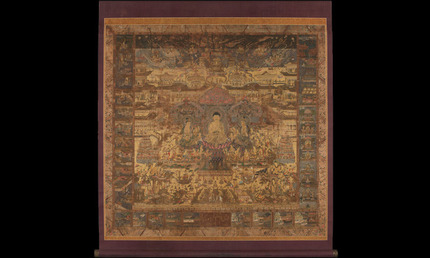 In Enter the Mandala, a series of mandala paintings align the gallery with the cardinal directions — north, south, east and west — transforming the open gallery space into an architectural mandala. Three of these paintings are richly detailed and red-toned in the Nepalese style; they were originally part of a set of five paintings. These three works—all in the Asian Art Museum’s collection — form what is perhaps the most complete set of its kind outside of Tibet.

Each of the five paintings portrays one of the five cosmic Buddhas. In the southern sector of the mandala, the first of the original paintings—portraying the yellow Buddha Ratnasambhava—represents the transformation of pride into an intuition of equality. In the centre of the mandala, the second painting depicts the white Buddha Vairochana, responsible for transforming delusion into knowledge of reality. The northern sector features the third painting, the green Buddha Amoghasiddhi, who transforms frustration into success. In the eastern sector, the blue Buddha Akshobhya, who transforms hatred into wisdom, is represented by a photo reproduction from the Honolulu Museum of Art’s eastern mandala. The whereabouts of the set’s original painting for the western sector remains a mystery. For this exhibition, the red Buddha of the west, Amitabha, appears in a 14th-century Japanese painting and transforms lust into insight. 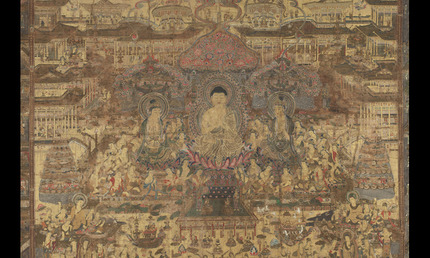 At the centre of this gallery stands a symbolic replica of the Svayambhu Stupa, perhaps the best-known example of a monumental Lightning World mandala today. Stupas — monuments created to enshrine the sacred remains of enlightened beings — originated in India as mounds for marking sacred sites or containing religious relics. In Lighting Vehicle Buddhism, the stupa’s architecture echoes the basic form of a mandala, with a central axis surrounded by four directions. Visitors can find other artworks related to Lighting Vehicle Buddhism on the museum’s Lighting Path gallery tour.

The museum is in the heart of San Francisco’s Civic Center district, directly opposite City Hall. Our address is 200 Larkin St. For directions and transportation information, see our Plan Your Visit page. View full map on google.