Awareness — If I manage to restrain my mind, by Acharya Shantideva

Wild elephants in rut cannot cause such harm as those torments of the deepest hell inflicted by the rampant elephant of the mind. But if I firmly secure this mental elephant with the rope of total mindfulness, all my anxieties will vanish and every virtue will be at hand. Tigers, lions, elephants, bears, snakes, every kind of enemy, the guardians of the hells, sorceresses and demonic spirits will all be bound by binding the mind alone. They will all be brought under control if this mind alone is brought under control. For the genuine teacher himself has taught that every fear as well as all this boundless suffering originates from the mind.

Who intentionally forged the weapons in hell? Who constructed the burning iron floors? Where did all the women spring from? The Buddha taught that all such things show the presence of an evil mind. Hence within this triple world there is nothing to fear but the mind.

If the perfection of giving were realized by eliminating all poverty in the world, then how could the previous Buddhas have perfected it? For destitute people still exist today. But it has been taught that giving is brought to perfection through the intention to give away everything one has (including the fruits of such deeds) to all beings. Hence it is simply a state of mind.

Is there any place on earth where the killing of fish and other animals has stopped? It has been explained that the perfection of morality proceeds from the attainment of a mind which renounces such deeds.

Troublesome beings are like space; it is impossible to destroy them all. But if angry thoughts alone are overcome, it is equivalent to conquering all one’s enemies. Where, for example, could one ever find enough leather with which to cover the surface of the earth? Yet the leather on the soles of one’s shoes can cover every inch of the earth’s surface. Likewise it is impossible for me to restrain all external events. But if I manage to restrain my mind, there would be no need to restrain anything else.

Because their activity is weaker, thoughts accompanied by physical and vocal expressions cannot produce such fruits as the heavens of Brahma in which the cultivation of a solitary lucid thought can result. And even when physical austerities and recitation are performed over a long period of time, the knower of reality has declared them as meaningless should one’s thoughts have been distracted elsewhere.

Hence those who wish to gain happiness and destroy misery will drift meaninglessly hither and thither if they fail to understand the mystery of mind: the supreme principle of Dharma.

/ must firmly take hold of this mind and protect it well. For what use will numerous disciplines be if they do not include the discipline of pro­tecting the mind.

Just as you would be ex­tremely careful of a wound when in the midst of a bustling, restless crowd, so always protect this wound of the mind when among a group of unreliable people. Afraid of just a little pain you would be very attentive about that wound. So why do you not protect the wound of the mind through fear of being crushed by the mountains of hell? Were I to conduct myself in such a way as this, then even when surrounded by hostile men or enticing women the integrity of my commitment would not be impaired. Let my wealth, reputation, body, life and other virtues go to ruin: but I will never let the mind degenerate.

I entreat all of those who want to protect their minds: ‘At all times energetically protect mindfulness and awareness!’ For just as people tormented by disease lack the strength to do anything, so does a mind afflicted with confusion have no power to engage in any action.

Like water in a leaking jug, whatever has been learnt, reflected and meditated upon by one whose mind lacks awareness will not be retained in his memory. Such treacherous unawareness will cause even those who are learned, devout and energetic to be corrupted by a moral fall.

The thieves of unawareness follow upon the breakdown of mindfulness. They then plunder the goodness we have accumulated so that we proceed to an unfortunate state. These thieving bands of emotion lie in wait for the right opportunity. Having seized it they rob us of our wholesome qualities and destroy the life force of a happy destiny. Therefore, never allow mindfulness to de­part from the doorway of the mind. If it does, then recollect the misfortunes of an evil destiny and firmly replace it there.

Through friendship with a teacher, instructions from an abbot, and even out of fear, mindfulness can be easily aroused in fortunate and re­spectful people. And if I reflect that I am constantly living in the presence of Buddhas and bodhisattvas who perceive everything without any hin­drance, I shall also be filled with shame, respect and fear. Moreover, this will make me repeatedly recollect the Buddha.

When mindfulness stands as a guardian at the doorway of the mind, then awareness will appear, and even that which had departed shall return. Being aware the moment it occurs that a certain thought is charged with emotion, then remain immobile like a piece of wood! 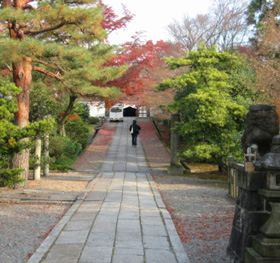 One should never look at anything distractedly for no reason. With concentrated vision always look about with a resolute intent. In order to relax the gaze then occasionally look into the distance. Should someone appear in the field of vision, look at him and greet him. To check whether there are any dangers on the path, now and again look ahead, to the left and to the right. Calmly turn the head around and look behind. When front and back have both been examined, then proceed either to come or go.

Likewise, in every situation recognize what has to be done and then act accordingly. Prepare for the action with the thought, ‘My body will behave in such and such a way’ Then from time to time observe it and ask, ‘How is it behaving now?’ As for this crazy elephant of the mind, make every effort to check that it is still tied to the sturdy pillar of thinking about Dharma and has not managed to break free. Those who are trying to develop concentration should minutely examine their thoughts. ‘What is my mind doing now?’ they should ask, and not allow it to wander off for even a second.

But if this is impossible when you encounter danger or attend a great festival, then use your discretion. It has been taught, for example, that one can be indifferent towards one’s moral precepts at times of generosity.

Once you have decided to do one thing, do not consider something else. With your attention focused upon that task, give yourself the time to accomplish it. In this way both things will be successfully achieved; if not, neither will get done. And in addition emotional unawareness will prevail.

If one becomes involved in foolish chatter or finds oneself at some amazing spectacle, do not become attached to it. If one discovers oneself pointlessly breaking up earth, picking grass or drawing pictures on the ground, recollect the Buddhist training and immediately stop out of shock.

Click here to read part two of Awareness by Shantideva.

You can read more articles from Stephen Batchelor, click here.

Buddhism Now is an online Buddhist magazine, giving advice on how to practise Buddhism.
Join 239,728 other followers