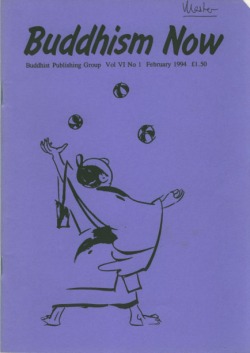 Pure Land Buddhism is one of the major schools in the East, yet has hardly made a dent here. I remember once hearing it being described as too ‘Christian’ for Westerners, yet almost all of the other schools encompass the notion of a Pure Land in some way or other. Even in Theravada the three Refuges can easily be interpreted in a Pure Land way. The very essence of it is that one is taking refuge…